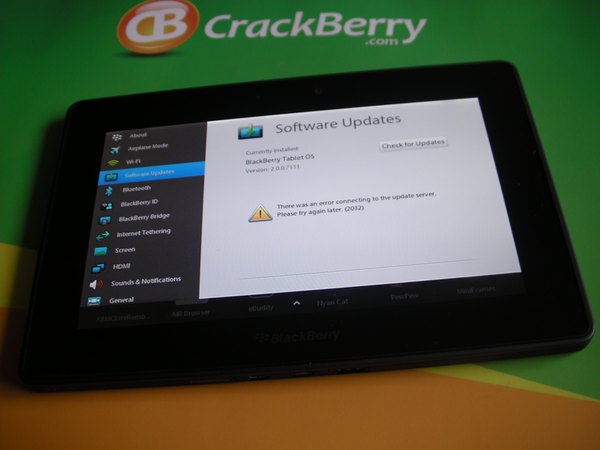 Seems as though a lot of people woke up this morning and grabbed their PlayBook to check for updates. If you fit into that criteria then you no doubt noticed that there appears to be an issue with BlackBerry PlayBooks not being able to connect to the update server.

Now normally, we might consider this to be a clear sign that RIM is preparing to roll out PlayBook OS 2.0 but in this case, we kind of have to waive off that consideration slightly. You see, the PlayBook update server has been off and on for the past few days now with countless folks reporting that they've not been able to connect in order to grab the most recent developer build, only now does it appear to be more widespread among users.

So what's the real deal? No one but RIM really knows. Could they be preparing for PlayBook OS 2.0 release? Maybe, but don't get your hopes up just yet. It could just be them getting things in order for when they are ready to release it.

In any event, RIM is aware of the issues at this point though they seem to be avoiding details as to why the update servers would be offline. Eventually though, you'll hit that update button and 2.0 will be waiting. Maybe not today, maybe not tomorrow but some day soon -- it'll be there. On a lighter note, you folks sure do check for updates a lot. Maybe they just cut the servers off to play some jedi mind tricks on everyone.