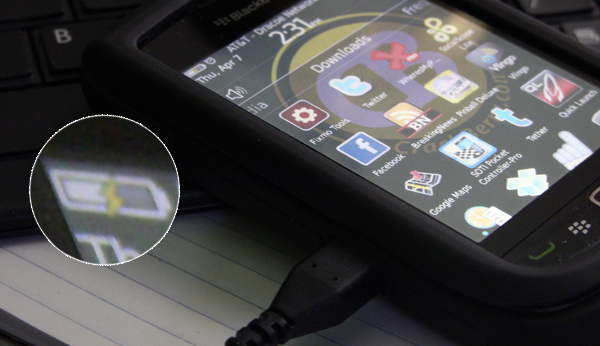 Pop quiz, hotshot. There's a bomb on a bus. Once the bus goes 50 miles an hour, the bomb is armed. If it drops below 50, it blows up. What do you do? What do you do? Oh, and your BlackBerry's battery is about to die. The correct answer of course is that you jump off the bus at the earliest opportunity (be sure to tuck and roll) and charge your BlackBerry.

While the events of the movie Speed are thankfully uncommon, a battery drained BlackBerry isn't. The device is a victim of its own success; our CrackBerrys typically last a day or more on a single charge.  Why would you charge a device that doesn't need it? Then, towards the middle of the day, the battery level drops into that dreaded yellow zone. Less than 30% power remains. Be it a USB cable, wall, or car charger; get your BlackBerry some juice, stat. If that's not an option, there are a few things you can do to minimize your power use. You and your BlackBerry just might be able to limp along until the end of the day.

Turn off the radios. The Bluetooth, Wifi, and GSM/CDMA radios use a lot of power. If you're not using them, turn them off. I suggest turning off Bluetooth and Wifi first. You'll still be able to get messages and emails through the mobile network.

Close unused applications: Every application in your app switcher is silently draining power from your battery. From processor cycles to contacting servers on the internets, everything these apps do is slowly killing the remaining power in your battery. Close those resource hoggers.

Turn off the phone: There is a danger of draining the battery in your BlackBerry too much; if it dies too much, it won't hold a charge. There are systems designed to prevent this, but that doesn't mean you can't help. At less than 5% charge, your device will automatically shut off all radios. That's pretty much the signal for you to power down. Hold down the red key until the phone "shuts down."

Or, you could simply carry a spare battery. Oh, and please don't try that jumping off the bus thing. It seriously hurts.