I've had a robot lawn mower bopping about my back yard for several years now. It's a dumb, old thing, wandering around like a first-gen Roomba vacuum and only fenced in from mowing the entire neighborhood forever by an invisible fence-style guide wire I had to stake all around the perimeter. But it does the job decently well so I don't have to, so I let it keep going around doing its thing.

But at the end of the day, my robot lawn mower is dumb and limited. There were a lot of robot lawn mowers at CES 2023, promising to use machine vision and artificial intelligence and whatnot to keep my grass trimmed. But the one that stood out to me most was Yarbo. For one, it looks cool with a track system for moving about instead of wheels (reduces point pressure on the grass and soil while increasing traction), and I like things that look cool. But it's more than that — Yarbo is modular, with the mowing attachment swappable for for a snowblower front end or a leaf blower attachment.

I live in Cincinnati, Ohio, where the snowfall isn't usually too bad so the snowblower attachment is interesting to me but not necessarily a game changer. But specifically at my house I have a lot of trees, and it just utterly rains leaves in the autumn for weeks on end. I can take two hours to clean it all up and my lawn will have disappeared by the next day. I love the trees, but right around the middle of October I contemplate cutting them all down. But if I had a robot that could clean up the leaves for me without my having to do anything about it? Okay, I'm listening. 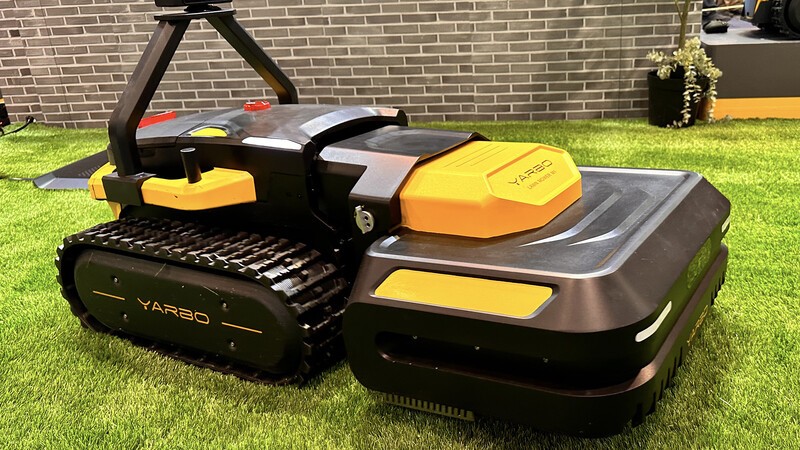 Yarbo promises a hefty 1.4 kWh battery with a two-hour recharge, the ability to tackle slopes up to a 68% grade, GPS and millimeter-wave radar guidance, and the capability to cover up to 2.3 acres.

This of course will not be cheap. At $7,000 for the complete set of blowers and mower, Yarbo costs at least as much as a few years of professional lawn service and snow removal. But getting help these days is proving increasingly difficult and expensive, so maybe there's an opportunity here. And while these three attachments are what Yarbo was showing off at CES, they have plans for more, including a brush sweeper, plow, vacuum, sprinkler, trash can dragger, and most audacious of all a multipurpose robot arm. All with a big docking station to automatically swap between modules.

If it feels like we're veering dangerously into the realm of the typical vaporware that plagued Kickstarter a few years ago, you're not wrong. Yarbo has no product release history, and went from showing off the snowblower-only SnowBot at CES 2022 to going even more ambitious with this modular do-it-all system. The basic tasks of lawn care seem simple at first, but the edge cases are really complex. And while there are some impressive YouTube videos of a Yarbo chewing up snow and methodically mowing a lawn, the edge cases are proliferate for a device that's supposed to operate fully autonomously. And all we could see at CES was Yarbo aimlessly moving around in a small space. There are a lot of questions remaining before I'll pull the tigger on something so expensive.

But in the meantime, I'l keep dreaming about all the leaves in my yard getting swept up without my help.