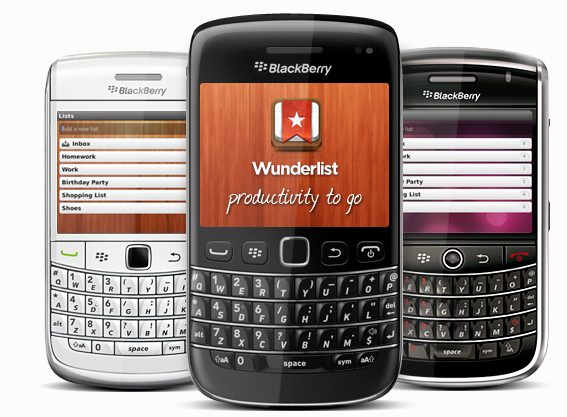 One of my all-time favorite to-do apps, Wunderlist, has finally made it to BlackBerry. The app had a short run in beta and is now ready to rock and totally free. With Wunderlist you can keep track of all of your to-do items, stay organized and just get things done. With available Mac, Windows Android and iOS apps you'll be able to stay in sync across all your platforms. Features include:

You can grab Wunderlist now for free from BlackBerry App World. Keep reading for their official announcement and answers to our questions about how they found the process of porting this application over to the BlackBerry OS.

More information/download of Wunderlist for BlackBerry

Ripe for the Picking – Wunderlist for BlackBerry now available

Another day, another Wunderlist-supported device! It's no secret that we're on a mission to put our adored task manager in everyone's hands, regardless of what device you're using. Today we're thrilled to announce Wunderlist for Blackberry, something that's long been requested by some of you.

This release follows support for Linux, and crowns Wunderlist for Blackberry the 9th member of the family. In anyone's eyes that's one helluva big family, and we're getting closer to our goal of supporting every major device and OS out there. So, what's the story?

As hinted by our blog post title, and following on from our unicorn story here, Wunderlist for Blackberry was hand picked from the forest of productivity – amongst the prioritize and due date trees. Ok it wasn't, but I'm sure our developers imagine this stuff on their quest for code.

Blackberry was an obvious choice for us. Similar to our Linux release, we were astonished that some of you had tried formulating your own Wunderlist for Blackberry version. After making it official and transferring everything you know and love about Wunderlist over to the device, we were ready to let some of you have a taste. We handed out some special beta invites a little over 3 weeks ago, and we were very pleased with the feedback.

You'll be pleased to know that Wunderlist runs on Blackberry devices sporting OS 5 or higher. If you're using a Bold or Curve, you'll need an SD card equipped. It supports touch and non-touch devices, so we've got you covered whether you're into tapping or clicking. To grab your copy now, load up Blackberry App World on your Blackberry device and search for 'Wunderlist'. Alternatively, you can use this link. Simple!

We hope you enjoy the new release. If you have any questions, please feel free to email us at [email protected] We'd really love your feedback, so get busy and leave some comments! Love, Matthew.

How did you find the process of porting your application over to the BlackBerry Platform?

We just started at the end of last year and the development process was extremely fast. We had to rethink some UI elements, but i'm really happy with the outcome. And it still feels like Wunderlist.

What kind of issues did you run into?

There wasn't a single problem during the development :)

With the changes, how does Wunderlist for BlackBerry differ from other platforms?

Basically it's almost the same like the iPhone and Android version, because we try to make the user Experience seamless across all platforms. The only difference is probably that you can navigate through the app without touching the screen.

What made you decide upon adding support for BlackBerry smartphones?

Wunderlist is supposed to be a cross-platform task-manager and the Blackberry version was just a matter of time. And although Blackberry market shares are decreasing it's still big in some parts of the world.

Can we look forward to seeing Wunderlist on the BlackBerry 10 software?

Any chance of seeing Wunderlist on the BlackBerry PlayBook?

Yes, in the future. Cheers!