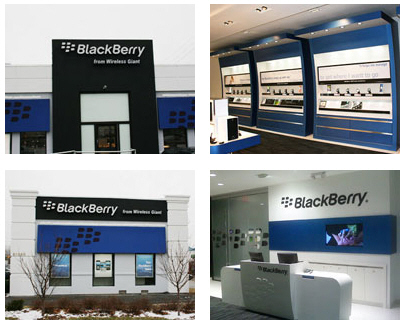 If I wasn't already going to Cuba in three weeks for a vacation I know what I'd be doing instead... taking a road trip down to Farmington Hills, Michigan to check out the world's first multi-carrier BlackBerry store!

While I like to think of CrackBerry.com as the online Mecca for BlackBerry Users, with only one of these concept stores currently planned this might be just be the offline equivalent (at least until we open up a physical CrackBerry store - now there's an idea!!!).

The BlackBerry Store from Wireless Giant is a multi-carrier store where BlackBerry smartphones from AT&T, Sprint, T-Mobile and Verizon Wireless can be purchased and activated for use with BlackBerry® Internet Service and BlackBerry® Enterprise Server. The store also offers training services for both end users and IT administrators from companies and organizations of all sizes. Customers will also find a range of add-on software applications and personal accessories for their BlackBerry smartphone.

So whaddya think? Is it worth the trip to Farmington Hills?

More Information and Discussion in the CrackBerry Forums >>