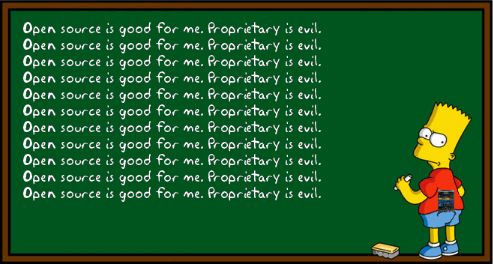 As I was crawling the Web for BlackBerry news, I ended up at our sister site, Android Central. I stumbled on this interesting article called ”What does 'open' mean to us?”, which discusses the state of open source and its relation to the Android platform. Being a loyal Linux hacker, I simply could not let this slip away – someone going by the name eric6052 commented on the article at Android Central saying, and I quote, ”I would like to see a similar article on all the SPE sites”. I shall make the first step for CrackBerry. So, what does 'open' mean to us?

With so much discussion and debate surrounding the word 'open', I personally have lost interest in defining it. Nowadays, I like to say it is something where the Free Software Foundation and Open Source Initiative will never reach consensus. I do know someone, however, who wrote a good definition of 'open'.

Most people involved with Linux will likely know what I mean with Open Sound System. For those who do not, it is a digital audio architecture for UNIX and Unix-like operating systems. At some point of my life, I had closely worked together with the people behind the project. Shortly after making the project source code available to the public, the lead developer, Hannu Savolainen, published an interesting entry in his blog to clarify what 'open' means in “Open Sound System”.

In accordance to Hannu's thoughts, 'open' could be defined as something that is fully documented from the ground up. To be open then means to welcome and encourage everybody to use a common system or framework to engage in collaboration with other people. The control of this infrastructure is therefore not in the hands of a single entity, but in the hands of everyone consuming and contributing to the ecosystem. Some may not be willing to share this definition of open, but I feel it best describes the very meaning of it. You can safely assume this is the definition I refer to when mentioning the word 'open' below.

Locked in, locked out

Despite documentation and the availability of an SDK provided by RIM, BlackBerry itself as a platform has never been truly open. A BlackBerry smartphone has always required a BIS or BES connection to be fully utilized. Without one – even with a WiFi capable handset – the user is left with an incomplete experience only. To sum it up in a single string of what you can not do with a BlackBerry without a BIS or BES connection (or any modifications), you can not use the BlackBerry Browser (with the exception of the Hotspot Browser), any of the social networking or instant messaging applications built by RIM (including Social Feeds), access App World or send or receive e-mail. There are a few others to note, but these are the most prominent worth mentioning.

It usually is a sensitive topic as to whether using a BlackBerry without a data plan is ethical, but it is important to note that BlackBerry smartphones are sold in greater and greater amounts to people who simply do not have the need to access e-mail on the go. The Street mentioned this in myth #2 in its article “Top 3 RIM BlackBerry Myths”  The control over the functionality of a BlackBerry smartphone is not limited to RIM only, though. Enter the term “Service Book”.

Service Books could be defined as collections of information, which instruct the BlackBerry smartphone to behave in certain ways given certain commands. For example, to send or receive e-mail on a BlackBerry, a Service Book record for the e-mail account must be present, which contains the necessary information for the BlackBerry to communicate with BIS or BES in order to reach the mail server.

There are various different Service Book records available to choose from. For example, to utilize BlackBerry Maps, an LbsConfig (location-based service configuration) record must be loaded. Even MMS functionality is controlled by Service Books. Now, with this much power over a BlackBerry smartphone, who gets to decide which Service Books get loaded on a BlackBerry? Service providers of course, also known as carriers.

Definitely, Service Books as well as the requirement to have a BIS or BES connection do not fall into any category of being open. Note that Service Books are different from IT Policies, which are used by BES administrators to limit employees from accessing certain functions of a BlackBerry smartphone for compliance with work regulations. So, is there anything in the broad world of BlackBerry that is open?

Developers wishing to develop for the BlackBerry platform may turn to RIM for online resources and an SDK to get into BlackBerry application development. With Java being at the heart of the BlackBerry OS, it has been possible for developers to use common and familiar development environments such as Eclipse or Visual Studio to develop BlackBerry applications. Indeed, RIM also provides an Eclipse plug-in to make developing for the BlackBerry platform a breeze using the Eclipse IDE. As great as this may sound, developers are limited to set up their tools in a Windows environment only. That is, until now.

Following the great announcements made at the BlackBerry Developer Conference 2010, RIM now provides a tech preview of its Eclipse plug-in for Mac. Definitely, this is a great start and a step in the right direction, but Mac developers are still left a bit in the dark. Simulator software – BlackBerry Smartphone Simulator, BlackBerry Email and MDS Services Simulator – is to date compatible with Windows only. In other words, developers working in Mac environments may wish to turn to Boot Camp or virtualization software in order to take full advantage of the development tools provided by RIM.

Although fairly uncommon, open source development has existed within the BlackBerry community for quite a while. A great example is the Funambol project, which brings SyncML and the BlackBerry platform together. Another interesting project is Barry, with roots in Waterloo, Canada. For Linux and BSD users alike, Barry is a very close equivalent to BlackBerry Desktop Software enabling much of the functionality Windows and Mac users have had the joy to use in the past. Last, but not least, is a project with much importance in open source circles: bb-ant-tools. It is an alternative to the RIM Java Development Environment, which also enables native Java application development in a Linux environment. Definitely, something worth looking into if setting up a Windows environment for BlackBerry application development is out of question.

You can judge for yourself, but based on all the above, there is certainly much 'open' going on in the broad world of BlackBerry. The number is quite low however, when compared to the BlackBerry platform at a whole. This does not necessarily indicate an issue, as the proprietary system that is grounds for the RIM infrastructure has proven to be extremely secure. To put it differently, if the BlackBerry platform was completely open, it could hurt the reputation RIM has earned for the security of its platform.

The future with QNX

There is more to RIM than just the BlackBerry OS. Unveiled at the BlackBerry Developer Conference 2010, the BlackBerry PlayBook is where RIM is heading to in the future. I must say, that I am very excited about it. Not necessarily about the tablet itself, but what it is based on – software from QNX.

With worldwide recognition in the industry, QNX Software Systems from Ottawa, Canada has made innovation like no other since 1980. A remarkable microkernel design in its POSIX certified Neutrino RTOS (real-time operating system) has enabled QNX Software Systems to target markets such as automotive telematics, medical instrumentation and military to name a few. Simply said, a robust and modular design that is unmatched by anyone else in the industry. Head over to the QNX Software Systems Web site for more information and the QNX Corporate Fact Sheet. And no, I am not getting paid for saying this. In fact, I have already seen and experienced QNX software in reality, all the way back to QNX RTOS v4. A father teaching at a university taking his curious son with him to work equals interesting encounters, that is all I can say :-)

A bit of understanding of the microkernel architecture lets me believe that we will soon have something truly unexpected coming from RIM. Thinking about it, the current specifications of the BlackBerry PlayBook reveal that it will first arrive in a WiFi only flavor. In other words, this could mean the end of legacy components found in BlackBerry OS, allowing for an uncompromised experience out of the box. When the QNX based OS finally reaches BlackBerry smartphones, we just may have something that is a true game changer. A more open future is ahead of us, I can almost feel it.