What an AWESOME weekend!! The 2014 Canadian Grand Prix is now racing history, and what a race it was. I can't help but think maybe the CrackBerry team's presence brought a bit of bad luck, as for the first time this year the Mercedes F1 Team — who is sponsored by BlackBerry — was not at the top of the podium on Sunday afternoon. That said, it was easily the most exciting race of the season and we had a blast all weekend long spreading the CrackBerry and BlackBerry love through the streets of Montreal. Be sure to watch the Story Maker video above for a recap of the weekend, and keep reading for more of the details, including the contest winner for a CrackBerry Racing Polo shirt! 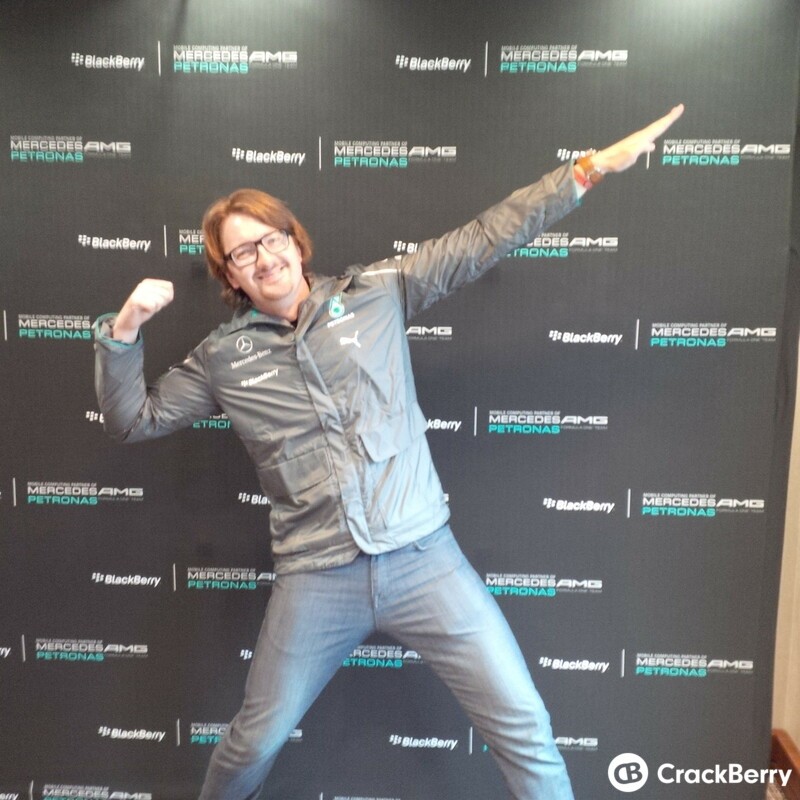 James Falconer (Mobile Nations' Community Manager) and I arrived in Montreal Friday afternoon. After checking into the apartment we rented for the weekend, we immediately walked over to the Westin hotel — the Mercedes team hotel for the weekend —where BlackBerry had a reception room. While BlackBerry didn't have a consumer-facing presence on the streets of Montreal this year as they did last year, they still took advantage of the event as an opportunity to meet with and entertain corporate customers.

As always, BlackBerry was AWESOME knowing the CrackBerry team was in town, and they hooked us up with a big box of Mercedes Formula 1 gear to give away to CrackBerry fans over the weekend. They also gave us the thumbs-up to catch a ride on the BlackBerry shuttle which went back and forth from the race track (a total God send). HUGE THANKS to BlackBerry for this!

Once we picked up the SWAG and got back to our CrackBerry pad, Adam Zeis and his friend Tom arrived (they drove in from New Jersey). We had a half hour of down time before heading to Action 500 for a CrackBerry meet up and some karting action. This was SO. MUCH. FUN. We had 11 people on the track for FIFTY minutes of racing. Turns out Adam reserved the track so we could do a "Championship" series, which included a 10 minute practice, 15 minute qualifier and 25 minute race. It was GRUELING. And so awesome.

I was cocky thinking I would be top of the podium, but I ended up coming in 4th. Tony Guiga and his two buddy's Santino and Michael showed up just before we were going to start the session, and they were all FAST as hell. It really was a great time though. The consensus was we HAVE to do it again next year. Everybody who attended the karting also walked away with F1 gear (including some of our CrackBerry Racing Polos!).

From the track we made our way back downtown, ending up at awesome patio of La Saint Sulpice, where we drank lots and lots of lots of BEER. :)

Wanting to make sure we were all in GOOD SHAPE for Sunday's race, we took it easy on Saturday. The CrackBerry team hit up Eggspectations for breakfast, then made our way up to St. Laurent street where we found a pub to watch qualifying at (where we also drank lots and lots of Sangria). From there we walked further up St. Laurent to world famous Schwartz's deli, where we consumed lots and lots of smoked meat. At which point we made it back to our apartment to sleep off the meat sweats. :)

While the rest of the boys stayed in Saturday night to watch the hockey game, I went to the Mercedes Gala event. It was a great evening of fun, food and entertainment, complete with an appearance from Mercedes driver and pole sitter for the race, Nico Rosberg.

Everybody woke up bright and early on Sunday and we made our way back to the Westin for breakfast and to catch the shuttle which left at 9am. With the race not starting until 2pm, we took our time getting to our seats, checking out all F1 merchandise that was for sale and we of course made time to drink a couple of Bud Lights in the presence of some new friends we made (see photo above!).

Our CrackBerry F1 shirts we're AMAZING. We had more than a few people walk up and ask us where they could buy them, and we also got spotted multiple times by CrackBerry fans at the track. Totally awesome.

Also awesome were our signs, made for us by CrackBerry's Michelle Haag and her kids (THANKS MICHELLE!!). The double sided signs were brilliant!

The weather was perfect - and we enjoyed the time in the grand stand leading up to the race, drinking beer, eating hot dogs and watching some of the pre-race entertainment, which included other races - like the historic F1 series (old F1 cars racing each other) and the Ferrari challenge. Once those races were done it was time for the driver's parade and then the real F1 racing began!

The race itself was awesome. We were a bit off of the big hairpin turn, so it there was plenty of action and attempted overtaking from our vantage. As the race kicked off, things went a bit crazy — Lewis dropped back to 3rd out of the gate, and a big wreck on the first lap sent out the safety car for quite a few laps. As the action went on, Nico and Lewis took a commanding lead until Lewis ran into some mechanical issues and was forced to retire. We were all cheering on Nico when we found out he too was having some problems. It totally crushed us when we heard the announcer say that he had slowed on the straight and Daniel Ricciardo passed him to take first, and ultimately win his first ever Grand Prix.

Overall it was an amazing day! Lots of great fans, plenty of beer and an epic race. Though I can't help but think we were a bit of bad luck for the Mercedes team!

See you next year!!

We had so much fun this year that we'll definitely be back again next year (and years to come). We've already started the planning, so stay tuned for more F1 awesomeness in Montreal next year!

Don't worry, we didn't forget —we still have to announce the winner of a limited-edition Team CrackBerry Racing Polo. And that winner is:

We'll be reaching out to you soon with details — congrats!