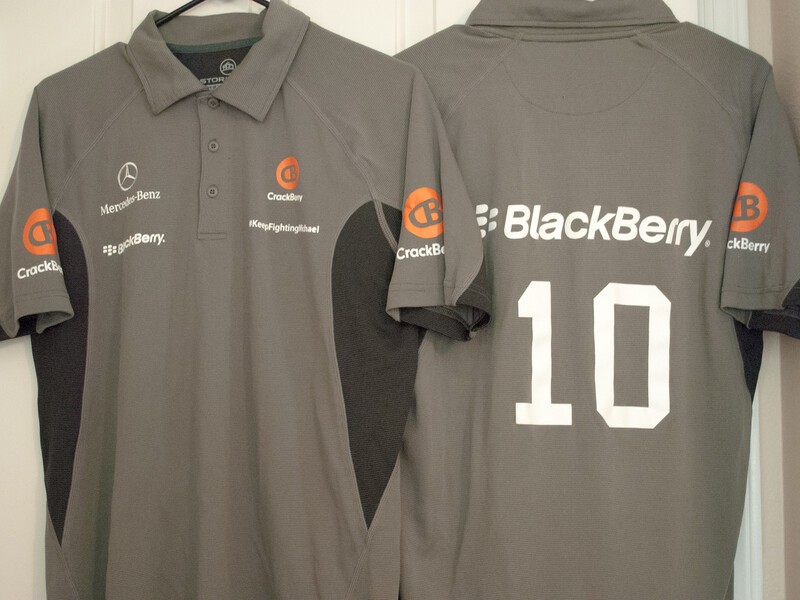 Leave a comment to this article for your chance to win a size XL Limited Edition Team CrackBerry Racing Polo!

The Canadian Grand Prix is fast approaching, and Team CrackBerry is getting revvvved up for it. I'll be in Montreal for the event, as will CrackBerry's Adam Zeis and James Falconer, and we aim to have a ton of fun all weekend as we take in the Formula 1 action and meet-up with as many CrackBerry fans as possible (for meet-up details, see this article).

As you likely are aware if you're reading this, last year BlackBerry entered into a three year sponsorship deal with the Mercedes AMG F1 team. 2014 is shaping up to be a DREAM season for Mercedes, with drivers Lewis Hamilton and Nico Rosberg sweeping pole position and winning every one of the first six races so far this year. It's been awesome to see the BlackBerry logo at the top of the podium race after race.

Off the podium, we're going to help spread the BlackBerry love through the streets of Montreal all weekend dressed up in our limited edition Team CrackBerry Racing polo shirts. We took inspiration for them from the official Mercedes 2014 Team Polo, and we CrackBerry'd it up to a whole new level. Gotta love the BlackBerry 10 on the back!!

Only a few of these custom tees exist, and they'll never be for sale, but we're going to give one lucky CrackBerry reader a chance to win one. This is a rare CrackBerry collectable! To enter, just login to CrackBerry and leave a comment to this post. The contest will end Sunday midnight PST on June 8th, which hopefully will also be the day that Mercedes and BlackBerry are at the top of the podium in Montreal.

Good luck! And if you're in Montreal on Grand Prix weekend, be sure to look out for us in our Team CrackBerry Polo tees, and if you see us, say Hi! Don't be shy!!