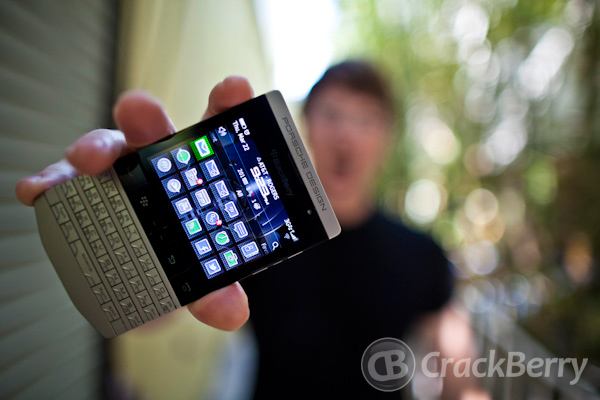 * Update - May 15th, 2012: OK folks, this is it. Today is the final day to get entered to win my Porsche Design BlackBerry! If you're not in on the contest yet, what are you waiting for?! I'll be announcing the winner here tomorrow on CrackBerry! *

Original Post - April 27th, 2012: As the world's #1 BlackBerry Fanboy, I take pride in always having the latest and greatest BlackBerry. So when the $2,000 Porsche Design P'9981 Smartphone from BlackBerry went on sale in North America, I just had to have it. The P'9981 is an exclusive (and expensive!) smartphone that gets a *lot* of attention thanks to its distinct styling and limited availability. As I mentioned in my P'9981 Review, you kind of feel like a celebrity just owning one.

And as much I enjoy using the P'9981 and being a member of the newly-formed Club P'9981 owners group, I've decided it's time to pay my P'9981 forward to a lucky member of the CrackBerry community. As was pointed out to me in an email I received from a reader earlier this week, the Fearless Leader of CrackBerry Nation should rock a BB more representative of the 99% of CrackBerry Nation, not the < 1%. I couldn't agree more. So I'm back on my white Bold 9900 and my P'9981 is up for grabs!

How to Win Kevin's P'9981: So this is it... your chance to win my slightly used but not abused Porsche Design BlackBerry. And because this contest prize is so awesome, I'm going to give you three ways and three chances to win: