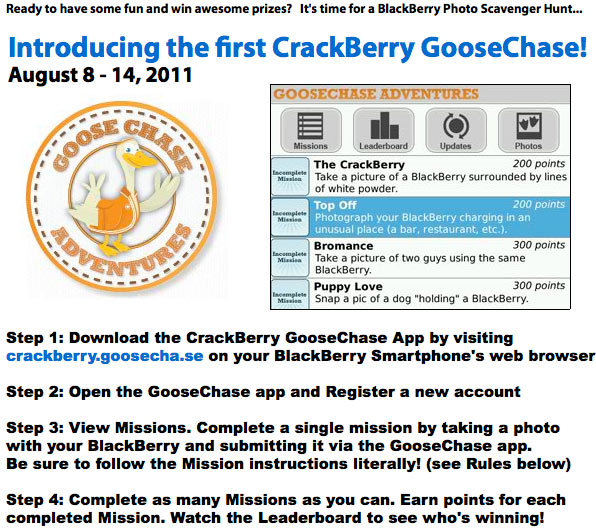 * August 15th Update: OK folks, our first CrackBery GooseChase is done and what an event it was. Stay tuned to CrackBerry as we post the winners and best photos! *

* August 9th Update: OK GooseChasers, Day 1 is off to a pretty awesome start and we have a lot of users competing fairly for their chance to win in the CrackBerry GooseChase.  We've got a couple updates here from the GooseChase team, so just wanted to get theme out for everybody to read:

OK CrackBerry Nation, Here it is... your first chance to win a free BlackBerry 7 Smartphone from CrackBerry.com. And instead of leaving this one up to luck, we're going to give you all the opportunity to earn your new BlackBerry by competing in the first ever CrackBerry GooseChase! Powered by our friends at GooseChase Adventures, it's a BlackBerry photo scavenger hunt. Once you install the GooseChase app on your BlackBerry Smartphone, you use the app to submit photos of completed Missions. Each completed mission will earn you points on the Leaderboard, and we've got awesome prizes for the top spots and best photos submitted! Note that some Missions are more difficult than others, so the points awarded per completed mission will vary. Within the app you can track your missions and Leaderboard status, and even see what photos other CrackBerry GooseChase competitors are submitting. This is going to be a super fun week on the blogs!

Head to crackberry.goosecha.se on your BlackBerry's web browser right now to download the CrackBerry GooseChase app, and while that's installing keep reading for more info on the contest (prizes, rules, etc.). And if you have any questions, leave them in the comments to this post and we'll answer them there. We've also setup an ffficial CrackBerry GooseChase thread in the forums so you can talk with your fellow opponents there.

Prizes: We've got a bunch of prizes to give away here, both for those who top the Leaderboard as well as bonus prizes for those who turn in some simply pure-awesome photos throughout the contest.

Elgibility: Open to everyone, everywhere*. You'll just need to have a BlackBerry Smartphone in order to download the app and participate. And make sure you have enough data, etc. for submitting photos (It goes without saying, but CrackBerry will not be held responsible for any data charges incurred!).

* Heck, since there's no luck involved here, this GooseChase will even be open to CrackBerry writers and forum moderators. However, if any of them manage to win a prize, we'll give away another prize so nobody misses out (so if Adam Zeis managed to top the Leaderboard, he'd win a phone but so would the next person in line).


Rules You Need to Know As You Start Completing Missions:

Support: If you have questions, please leave them in the comments to this blog post and watch there for a response (if one person has a question, we're sure others will have the same ones too so we'll keep the support nice and public. Both CrackBerry and GooseCha.se will be monitoring.

Torch Owners please note this bug: Within the app, photos taking on the Torch are rotated by 90 degrees when taken in portrait mode. This is a phone specific problem that needs a fix from RIM to be able to handle both landscape and portrait photos properly (so don't worry about it... and RIM, fix it!).

HUGE Thanks to GooseChase Adventures: Huge thanks go out to GooseChase Adventures for partnering with us to run this contest. I met these guys during my recent trip to Waterloo and can't say enough good things about them. GooseChase makes team building fun again with real-time mobile scavenger hunts. Participants compete using their iPhone, BlackBerry and Android smartphones, snapping photos to collect as many points as possible in the time allowed. It's perfect for rewarding, integrating or icebreaking a group of people. Head to GooseCha.se to learn more and get in touch with them. If you're looking to do some FUN team building, I highly recommend GooseChase Adventures. Be sure to tell them you learned about them on CrackBerry!

What are you waiting for?! Download the App and Get Started...

The CrackBerry GooseChase has Begun!!