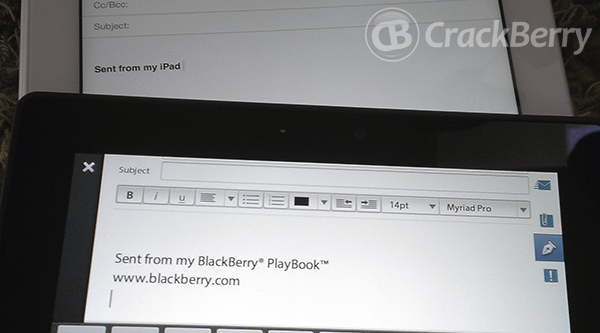 When I get an email from someone that says "Sent from my iPad" I immediately conclude that person places little value on their time. Agree?

At face value and given my position as Fearless Leader of CrackBerry Nation, I'll admit the tweet comes off as harsh and fanboy-ish. Yes, I'm ripping at the iPad in it. However, my remark is actually true for all tablets, hence this follow up post to fully explain my rationale. Furthermore, my tweet was specifically geared towards people using their tablets for business, rather than personal use. I guess sometimes 140 characters just isn't enough to illustrate a point...

I picked on the iPad yesterday because I literally had just received a long email from somebody we do business with -- whose services we pay plenty of $$$ for -- who sent the message from their iPad. When I opened the email, the first thing that jumped out at me was that signature, Sent from my iPad. Before even reading the email but just looking at the length of it, the *first* thought that went through my mind was clearly this person isn't working hard enough for us if they have the time to tap this message out on a tablet.

Feel free to call me a jerk for thinking that, but I couldn't help it. That's literally the first thought that went through my mind. And reflecting on it, that's the the first thought that always goes through my mind when I receive a long email sent from a tablet. Speaking to a few of my colleagues that I work with, they completely agreed with my sentiment. And throwing it out on twitter, well over 50% of the people who replied back agreed as well. As for the ones who didn't agree with me, it turns out they're mainly the ones who have yet to change their tablet's default email signature! But after this editorial, maybe they will.

Appearances matter in both "real life" and "digital life"

In "real life" and especially in business, people make judgement calls all the time based on presentation. How you dress, the car you drive, the way you do your hair... we still live in a world where appearances do matter. People take cues from these sorts of visuals and form opinions about people around them. It's one of the less appealing aspects of human nature, but it is reality. I don't think many people will disagree that if you want to be taken as credible and successful in your work / career / professional position, you want your appearance to match the expectations people have for that roll. Example - If you're heading to court, do you want your lawyer looking smart and trustworthy to the judge and jury, or like he or she just rolled out of bed?

Even in my roll I get reminded of the need to keep up appearances. As a "blogger" who's working from a home office in an online environment that's always trying to push the boundaries, I always figure I can get away with a casual don't give a frak look. Heck, I'm writing this post while sitting in my underwear. To me that's an expected and acceptable appearance for a tech blogger. But when I head out of that work environment, CrackBerry readers are quick to remind me in the comments that I need to change my appearance to match differing expectations... "Kevin, when you're going to talk to the CEO of BlackBerry and give interviews on tv, at least get a haircut and put on a blazer and tie... you want people taking you seriously!"

The importance of keeping up appearances in real life is obvious. What I'm highlighting in this article, though not as obvious, is that appearances are important in your "digital life" too. This is especially true when it comes to email communications.

IF YOU TYPE ALL IN CAPITALS IN EMAILS, PEOPLE THINK YOU ARE SHOUTING AND YOU COME ACROSS AS HIGHLY ANNOYING TO THEM AND THEY WILL THINK LESS OF YOU. Everybody knows this one. People will judge you and make not so nice oppinions about you if YOU CHOOSE TO WRITE ALL IN CAPS ALL THE TIME.

It happens. Thus, it's not such a far stretch to consider people may and will place judgement based on your email signature too.

On phones, using the default email signature is OK

Honestly, I'm not sure where the default email signature originated, but it's been around for a long time. Going back to my first BlackBerry, any email I sent from my phone by default always said "Sent from my BlackBerry Handheld Wireless Device". As newcomers entered the market, we saw them follow suit. Messages sent from the iPhone say "Sent from my iPhone."

From the manufacturer's standpoint, the reasoning for this default signature is FREE advertising. I'm sure, especially in their early years, it helped Research In Motion sell a lot of BlackBerry devices. As you send emails, you're telling the person on the other side what type of device you sent it from. It would be silly for the phone manufacturer to not put this in. It's the same premise as when you buy a car and the dealership puts a sticker on the back with the name of the dealership. As you drive your car around in everyday life, you're telling everybody where you bought your car from. Years ago I read a case study while in business school that examined this exact concept, and it placed the value of that car dealership sticker stuck on the back of a Porsche sold at a dealership in Los Angeles at $400,000 per year. Insane.

While it's definitely beneficial to the manufacturer in the form of free advertising, when it comes to the phone's owner, this default signature is actually a good thing. For one, when you're replying to an email via your phone, it shows the person on the receiving end that you are responsive. Even away from your desk, you're taking care of business. Secondly, it's a disclaimer. If your email is short or has the odd typo, it's accepted as being OK by the person on the receiving end because you're sending it from a phone. It's understandable that mistakes may happen when pounding out a message from a phone.

On tablets, using the default email signature can be BAD

Unlike phones, which people carry around everywhere and use all the time, tablets are a different story. YES, some people will take their tablet with them everywhere. You will see tablets in public. But the majority of people are still using tablets in the same places where they would otherwise be using a laptop or desktop computer. Tablet sales statistics prove it. WiFi-only tablet sales outweigh cellular radio versions by a large margin. The majority of tablet use is still happening at home or in the office. And while tablets can be extremely productive, given the option of a computer or tablet, most people will look to the computer as the tool for productivity vs. the tablet which is more ideally suited for consumption. The average person is going to type way faster on a full size computer keyboard than on a touchscreen tablet.

Unlike the default signature on the phone, which subconciously tells the recipient you're responsive all the time and from everywhere (a good thing), the same isn't true of the tablet signature. To me, and the many others who have expressed agreement with my viewpoint, it gives off the appearance that you're a person who doesn't value your time. If you did, you'd head to a computer and pound out that email wayyyyy faster. Time is money. And if you're a person I'm paying to provide services, the last thing I want to see is time wasted.

Of course, there are exceptions. YES, some people *are* mad fast at typing on glass. YES, you can use bluetooth keyboards with your tablet and speed things up a lot. YES, you may have to use a tablet for work and do not have a computer alternative to go to. But these are exceptions, and your default tablet email signature does not reflect those exceptions.

Change your default tablet signature. Do it. Do it now!

Even if you disagree with my viewpoint here, not everybody does. So why take the risk of being viewed by others as not being productive when the solution is so simple? Just change the default email signature! It literally takes ten seconds. Turn it off and leave it blank. Or set it to be the same signature that is on your phone if you're prone to typos on your tablet and want to take advantage of a disclaimer. Or if you want to be consistent and have a disclaimer, change the signature on both your phone and tablet to say "Sent while mobile." The signature is there for the recipient, not the sender, and a signature calling out the name of the tablet you own ads no real value to the person receiving your email.

There is simply no useful reason to put into an email that you're sending it from a tablet other than wanting to give free advertising to the manufacturer or bring attention to the recipient that you own a tablet. Maybe if you work for Apple or BlackBerry it would make sense to (or are a shareholder or fan), or if you want to brag to others that you own a tablet, but these reasons are not relevant when it comes to sending emails for work. There's a reason you don't see "Sent from my desktop computer" accompanying emails. There would be no point. The same is true for tablets.

Change it. Change it now. If you're using your tablet for business and you're in a position where time is money, remember that appearances do matter in the "digital world" too.