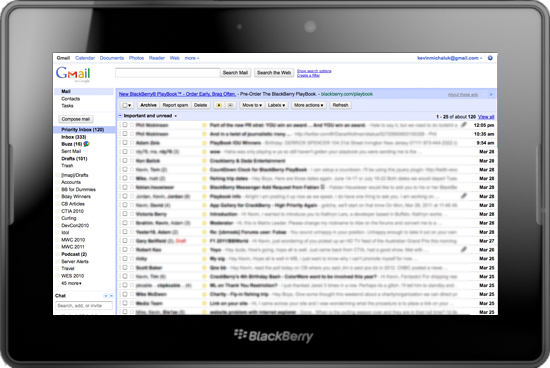 The PlayBook's web browser should pull up your Gmail just fine... until the day (hopefully soon)
that RIM rolls out the native email and PIM apps

There is no doubt in my mind that the single biggest point of confusion and concern amongst the uninformed surrounding the BlackBerry PlayBook tablet is the sentiment that you need to own a BlackBerry Smartphone in order to use a BlackBerry PlayBook (in other words, the PlayBook is an accessory to a BlackBerry Smartphone, vs. a tablet device that can stand up on its own). I've had friends, readers and my next door neighbor raise this issue with me, and last week I even witnessed WSJ's Walt Mossberg relay this same notion/misunderstanding when he was a moderator on a panel discussion at CTIA.

The confusion arises from the fact that the BlackBerry PlayBook, which runs RIM's new QNX-based BlackBerry Tablet OS, will lack native/core email, BBM and PIM (contacts, calendar, etc.) support at launch (however you can still use the web browser to access email/calendar/etc. from the web and there is nothing stopping third party developers from building apps for these purposes). Because RIM built their reputation as a mobile email powerhouse and has always enjoyed a leadership position when it comes to mobile communications (think BBM, BES/BIS), I believe a lot of people have mistakingly took this to mean that RIM made the conscious decision to permanently leave these features off their tablet. I mean, if anybody should be able to implement solid email on a tablet, it's RIM, right? So if it's not there, it must be some sort of sinister tactic to want to try and convince people to buy both a new phone and tablet and use them together only as a package deal, right?

Wrong. The reality of the matter is that RIM simply does not yet have this functionality ready for the new QNX operating system in the way they want to roll it out (and trust that it's secure), and with the usage case of the tablet being different from that of a smartphone, RIM figured it wasn't necessary to wait for it to go live in order to get PlayBook sales rolling. RIM has invested massive amounts of money over the years into their Network Operation Centre (the NOC) and you can guarantee that any and every BlackBerry device they put into the market, be it phone or tablet, is going to be able to connect to the NOC so it can take advantage of the added value it provides (push email, security, efficiency, BBM, management/deployment for enterprises via BES, etc.). RIM **could** have more easily implemented native email and PIM into the PlayBook the way other manufacturers do it, but then RIM would be selling itself short as it would be bypassing the NOC. So instead, RIM is taking a lesson from Apple here and is going to market with an arguably unfinished product and will instead rollout further features when they are ready (remember, the iPhone never launched with an App Store and it took a while for them to invent Cut and Paste). Yes, it would absolutely be better if everything was there at launch, but the fact that it is not there does not mean the device isn't worth buying. So if you buy a PlayBook on April 19th, it won't natively be connected to RIM's NOC the way today's BlackBerry Smartphones are, but at somepoint in the near-ish future that connection will be made and the full power of the PlayBook will be unleashed (likely prior to the release of the 4G PlayBook.. and we ARE hearing that the WiFi-only PlayBooks will get native BBM at that point too).

If you've been thinking that RIM should have put the new QNX operating system onto a phone before putting it onto a tablet, it should be making sense to you now why they instead took the tablet-first approach. The smartphone is an always-on, always-connected device. When QNX-based BlackBerry Smartphones hit the market, this connection to the NOC (and native email, PIM, etc. clients) absoutely must be there. But while the smartphone is your most personal mobile device -- it's on you 24/7 and it's your life line -- the tablet is a little different, slotting in somewhere between phone and computer. The phone is still your on the go, running down the street while texting device. It calls out to you constantly with every message and notification you get (a phone can be a curse as much as it can be a gadget). On the other hand, the tablet experience is different - you choose to pick up the device. Owning a tablet doesn't really change the way you use your phone as a communication tool (I know it never has for me and I own both an iPad and iPad 2), but once you own a tablet you'll find there are things you prefer to do on the tablet over the phone, even though the phone has the same capabilities. Example - I can play Angry Birds on both my iPhone 4 and my iPad, but given the choice I'll always play it on an iPad.

I know for me personally that even when the BlackBerry PlayBook does receive the software update that brings to it native email and PIM, that I likely won't take advantage of it, as those are timely activities I prefer to do on my phone. For this same reason, I'm not even sure how much I'm going to be using the BlackBerry Bridge on the PlayBook. If you're not familiar with it, the BlackBerry Bridge is a value-added feature for people who own both a BlackBerry Smartphone and PlayBook, which essentially turns your PlayBook into a big touchscreen interface for your phone. You pair your BlackBerry Smartphone to the PlayBook via Bluetooth, and from there you can do do your phone's email, BBM, calendar, contacts, tasks and memos on your PlayBook. It's definitely a cool feature, and a pretty smooth experience, but the odds are I'm going to reach for my BlackBerry Smartphone when I feel it vibrate that I just got a message (I guess time will tell). That's not to say I'll never do these things on the PlayBook - I definitely will - but for me it means that I'm OK with having to go through the web browser to get to my email and calendar.

As I'm typing this blog post I'm working in Firefox, and up top are two more open tabs - one for Gmail and one for Google Calendar. Yes, my Mac has a native client for email and calendar, but I've never used them. On my computer I access my email and calendar via the web browser. I think a lot of people do that these days. So if I have to do the same thing on the PlayBook at launch, it's not really a big deal. I'll make a homescreen web browser shortcut for Gmail and Google Calendar, and when I do kick back in my chair and decide I want to check my email on my PlayBook instead of on my phone or computer, it really won't be that big of a deal.. at least for me (I do get there are milions of people out there not like me on this issue). Plus there's nothing stopping developers from building apps to handle all of these email and PIM tasks, so if it has to be an app that makes people happy, I'm sure that will be along soon enough. It just won't be a native app from RIM, until they're happy with the security of the QNX OS and how it is talking to the NOC.

At the end of the day, I'm not trying to defend RIM here. YES, the PlayBook needs to have native email and PIM. You can justify its lack of being there by saying you have an awesome web browser you can go through, but at this point it's an expectation so RIM has to have it, period. And yes, it would have been better if RIM had it ready to go at launch. It *should* be high on their priority list, so you'd think they could have had it done for launch and then there would be no confusion and I wouldn't have had to write this article.

At least we hear the software update process on the PlayBook is super smooth (two minute upgrades over WiFi and no rebooting required), so let's hope RIM just gets this addressed quick and it's a dead issue.