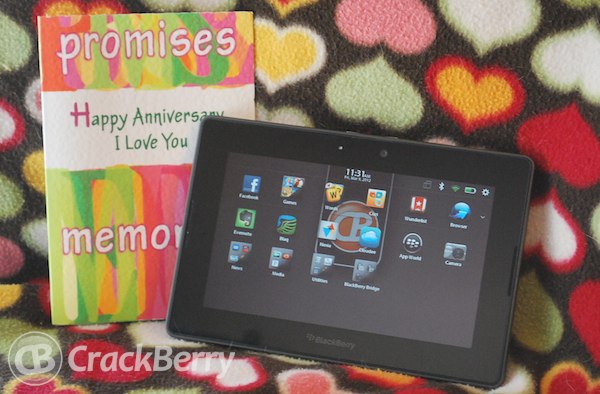 Am I a BlackBerry fanboy? Yes, but you knew that already. In the last two weeks I have become an even bigger one thanks to the BlackBerry PlayBook OS 2.0 software update.

Before the update, I was a fan of my PlayBook, but I didn't find myself using it on a daily basis. I kept it on an end table and it was more of a couch reader than anything else. I'd use it for quick web searches, maybe a game here and there and I'd typically pull it out and use Evernote when conjuring up dinner in the kitchen. Thanks to the PlayBook 2.0 software however, I've been carrying my PlayBook with me much more often. I find it leaves the house with me now and I'll carry it to and from my office. So this is my fanboy post about why I love my BlackBerry PlayBook now more than ever - how the native PIM apps didn't change that and why sideloading Android apps is awesome.

Why I love my PlayBook now more than ever

What didn't change my view - Native Email and PIM Apps

Flash back to CES 2011 - I had countless discussions arguments with Kevin, Bla1ze and others as to why I didn't think that native email on the BlackBerry PlayBook was a huge deal. Kevin's argument was that it had to be there so people didn't complain that it wasn't, and that's a point I would have to agree with. Ever since I had my iPad I never used the native mail client. I'm a Gmail guy by choice, and Google has always provided a great web experience no matter what the platform. Using email through the broswer never seemed like a chore to me. When I'm at my computer during the day I use my web browser for email; when I'm away, I use my BlackBerry. Even when I had turned to the dark(er) side for a three month iPhone stint, I still chose to use one mobile device primarily for email and would then browse the web on my iPad or computer.

Using the native messages app on the BlackBerry PlayBook is a great overall experience. Having native email makes the tablet much more well rounded and is a big selling point to many. For me, however, I look at the native apps (Messages, Calendar and Contacts) as "bonus features". If I didn't own a PlayBook and were to go tablet shopping, these apps would mostly likely not be a deciding factor for me. When I'm out of my house, on the couch or anywhere away from my computer, I use my BlackBerry for email. Lengthy emails are reserved for a full size keyboard, and I believe mobile emails should be cranked out quickly and efficiently, which my BlackBerry Bold 9900 does just just fine.

I think that the one big downside to the Messages app on the PlayBook is still the lack of true two-way sync for Gmail between phone, tablet and Gmail (which is ultimately a phone/BIS problem - BB10 aims to fix all that). Using an iPad and iPhone together, if you choose to use the Mail app on both you'll get two-way sync along with it. Instantly your messages are marked as read, unread or deleted across the board. BIS email is notorious for not having true two-way sync. After years it still takes minutes hours at times for email to fully sync between your actual inbox and phone. When I open the Messages app on my PlayBook, read an email and then turn to my Bold 9900, I would expect to see that same message to be marked as read -- but that's not the case. While it works great between Gmail on the web and my PlayBook, sticking the phone in the mix kinks it all up. Perhaps, if two-way sync worked properly (and as it should in 2012) I would be much more open to using the Messages app on my PlayBook. As it stands, I feel email on the PlayBook is really something I can live without. If I do find myself with a burning desire to use email on my PlayBook, I'll head straight for BlackBerry Bridge. For me, Bridge email gets the job done as much as I need it to and still beats the native messages app on the PlayBook.

The native Contacts and Calendar apps fall into this bubble as well  -- but to  a lesser degree. Not utilizing email on my PlayBook means my need for a Contacts app is lessened dramatically. Since I'm more of a "fly by the seat of my pants" kind of guy, a Calendar app is never a big feature for me.

Why Sideloading Android Apps is cooler than downloading from App World ... for now

I've never been a big apps guy by any means.  I use a BlackBerry as my phone of choice because it is the best communication tool there is -- it has amazing email, simple SMS, makes phone calls and has the greatest mobile IM client in BBM. A full QWERTY keyboard means I can type messages quickly and that flashing LED lets me know when my BlackBerry needs me. During my iPhone trial I fell in love with apps, however. Knowing there were apps for any little thing I could think of made me wonder why I ever chose to use a BlackBerry at all.  After weeks of feeling guilty as my Bold 9900 sat in my desk drawer, I realized I couldn't communicate worth a damn. I constantly had to check for typos, couldn't easily search how I wanted, had no keyboard shortcuts and my iPhone never once blinked red to tell me it missed me. So after more than a few days of debate I reunited with my long time love and never looked back. My iPhone now serves as a shiny dust collector on my desk.

So what's the point? Well, while I realize that I don't need apps on my phone; what I do want is apps on my tablet. I want my tablet to serve as an extension of my phone and give me different options. I don't want my PlayBook to be a direct mirror of my phone - if it were, what would be the point? I like going to my phone for a few apps and heading to my PlayBook for others. It's funny because I find myself using my PlayBook, putting it down, and then immediately picking up my phone to do something else. I keep my social actions like email, Twitter, BBM and Facebook confined to my phone, while my bigger browsing and gaming is confined to the PlayBook.

While BlackBerry App World stocks a good chunk of apps/games, it still doesn't have everything that we'd love to be using. Sure we could jump right in and name drop Skype and Netflix, but I'm in the 1% that doesn't care about or need either of those. I use a pretty specific set of apps across all my devices, and less than half are available in BlackBerry App World. With the PlayBook 2.0 software and the built-in Android App Player however, I can find the free apps I need with a little research, load them up onto my PlayBook in just a minute and I'm up and running. Apps I use pretty much every day include Evernote, Cozi Family Organizer (which has since turned up in App World), Wunderlist, Twitter, Facebook, Pandora, Nexia (for my home automation)  and yes, Words With Friends. Sadly only Evernote and Facebook have official apps for the PlayBook. For Twitter there is no official app but a few third-party choices available. Wunderlist, Words With Friends, Pandora and Nexia are all Android apps I had to sideload on my PlayBook - and they all work awesomely (yes, awesomely).

Having these apps truly does make me use my PlayBook much more than in the past. Previously I found myself using it here and there for some games and to jump on the web, but now I cart it around with me and use it much more often. Everything is clean and organized thanks to the home screen dock and folders, and it's just an all around better experience. Granted I'm in a small user set in that A) doesn't use email on my tablet often and B) was able to find the small selection of apps I use without too much effort.

So overall it breaks down like this - While I was a fan of my BlackBerry PlayBook all along, it wasn't really a "must have" device for me. I liked knowing it was there for couch browsing, movies on trips and occasional games, but until the release of OS 2.0 I could easily ignore it. Now, I love my PlayBook more than ever. It has the apps I want, can be organized to fit my home screen OCD needs, plays nice with my Bold 9900 and just keeps me wanting more. Every day now I get up and grab both my Bold 9900 and PlayBook (where my PlayBook used to get left behind) and bring them to my office. I use both throughout the day and would honestly miss my PlayBook now were it not to be there. If you don't have a PlayBook yet - shame on you. Go buy one.

Hopefully the releaes of OS 2.0 has brought you a new found love for your PlayBoook as well. Sound off in the comments and let us know!