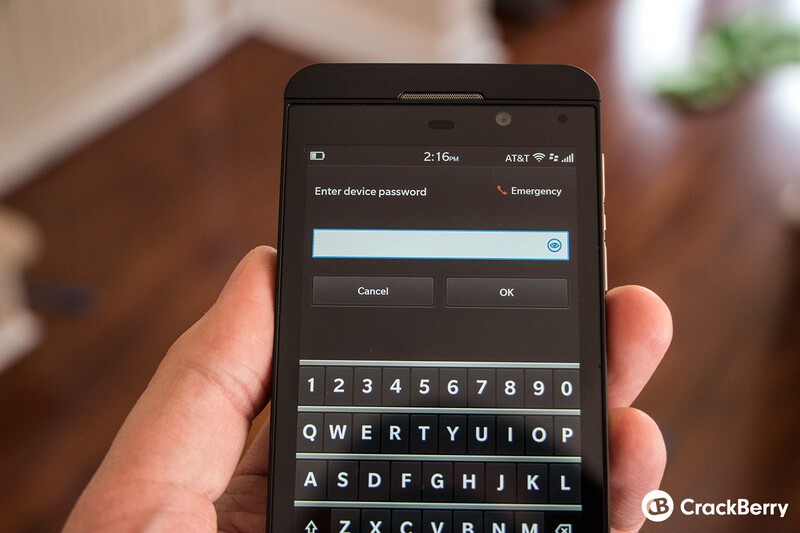 I have always been a big believer in the security offered up by BlackBerry. For arguments sake, I don't work in a crazy-big corporate environment where the data on my phone is at risk. If anyone got access to my phone, they'd see a bunch of BBM's to my wife, my non-private contact list and the handful of emails I get through the course of the day.

I don't have any secrets hiding on my BlackBerry Z10 nor am I terribly worried about it being snatched since I can wipe it with BlackBerry Protect and carry on my day.

That being said, I've always used some sort of security lock on my BlackBerry devices - be it the built-in password lock or a third-party app with a PIN or pattern lock function. For my Z10 however, I've opted to go lock-free for the time being.

Why? Because it's a pain in the rear to enter it each time I use my device and the risk doesn't currently outweigh the reward for me.

On the BlackBerry Z10, the password lock option locks your device so you need to enter the password to gain access. In many cases you can set the time before the device locks unless otherwise specified by your IT department. Simple enough.

When you want to use the device, you are required to enter your password on the lock screen. For most this is a requirement, but for those that choose to have a password (ie. users who aren't covered by an IT policy) it can be more of a chore than it's worth at times.

Now don't get me wrong, I'm not saying don't use a password. I'm just stating my opinion that on the Z10 the process of entering a password each time I want to get at my device (which is a lot through the course of a day) isn't ideal for me. I feel that the process is cumbersome in its current state and just not for me.

On past devices, using the physical keyboard to enter a password was cake. I had a simple one set and my muscle memory kicked in when entering it. Most times it was an easy 4-digit code of random characters. I also changed up to pattern lock utilities from time to time since they provided a decent bit of security and were quick enough to access.

My issue with the Z10 is that the password screen isn't ideal for quick access when I need it. On my iPhone I loved using a 4-digit PIN that I could tap out in two seconds to get access to my device. Now, I find that I enter my password incorrectly on my Z10 more times than not due to the layout of the keyboard and lock screen.

What I would love to see is other lock options built-in to the OS like PIN or pattern lock. Android devices give you multiple options and I think that's the way to go. Even without the use of a third-party app we should be able to setup a level of security that works for us and not be locked down to only the password method. A PIN or pattern option seems like a no-brainer for casual users. All that screen real estate on the Z10 makes for a great spot for a giant number pad or pattern screen, no? I would hope that the option is put into the OS natively at some point.

A PIN lock on the Z10 would be awesome

Of course onces the new API's and updated OS come along there should be support for apps to run in the background (instead of having to actually have the Active Frame open as it is now) so we can hope that this also means access to the lock screen for third-party developers to step in with a slew of screen lock apps.

For now though, I'll fly along without a password. So yes, that means if you happen to steal my device you'll have an all-access pass to it. Providing you can find it in the time it's out of sight when I'm either in the shower or sleeping - it's all yours.

How about you? Do you use the current password lock or are you flying lock-free? Sound off in the comments!