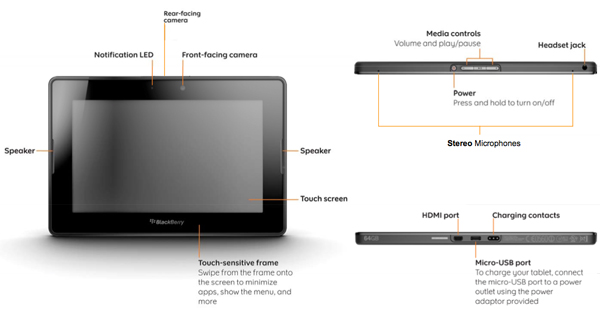 The Globe and Mail posted a really great article yesterday titled RIM makes a play for its future that walks through a lot of the back story leading up to the creation of the BlackBerry PlayBook, and how RIM is positioning themselves for the future. I definitely recommend reading the full article, which looks at both RIM's success and the challenges and opportunities they face moving forward.

Relating to the BlackBerry PlayBook specifically, the article helps us to confirm some of those early rumors we were tracking going back to the first whispers of a tablet (that RIM was originally thinking about doing a tablet based of the BBOS, but after the iPad got announced knew they had to do something more ambitious) and confirms that the product development cycle for the PlayBook was extremely fast.

The article also gives us some insight into why RIM chose to build a smaller tablet with a 7" display, vs. going with a bigger size like the iPad. The decision comes back to Todd Wood, RIM's head of Industrial Design, and his team:

"Mike (Lazaridis) asked me, ‘What would you think of a bigger BlackBerry?' " Mr. Wood says. The task was twofold: create something that actually looks different than older BlackBerrys, but sets a design precedent for future ones.

Mr. Wood sent his people out into the real world to look for inspiration. They came back with a theme. Many of the things people carried around with them - paperbacks, Moleskin notebooks, DVD cases - seemed to conform to a certain size.

If the PlayBook was to be truly mobile, Mr. Wood believed, it would have to be roughly the same size, something a person could hold with just one hand, unlike the iPad. The designers and the engineers agreed a seven-inch screen would meet that goal and still be able to fit the PlayBook's brains - a high-powered circuit board sandwiched between two batteries - inside.

Over the summer, Mr. Wood's team of industrial designers began to build the first PlayBook mockups, first out of foam, then plastic, and finally the initial working versions, which were in place not long before Mr. Lazaridis took to the stage at San Francisco's Moscone Centre last September and unveiled the PlayBook to the world.

The more I use the PlayBook the more I'm appreciating the "real world" size of the device. It's definitely portable, and definitely comfortable to hold with one hand for even extended periods of time. So I can see why Woods' team went this route. And I as noted in my BlackBerry PlayBook Review, I'm sure with time we will see a bigger PlayBook from RIM too - offering choice is in company's nature. For the full story, hit the link below.

Read the Full Story - RIM Makes a Play For It's Future