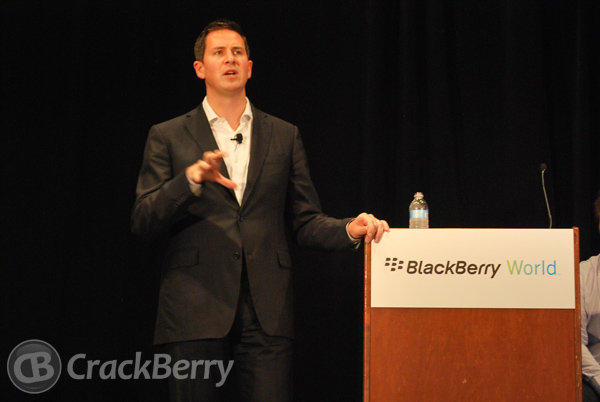 * Update: Turns out Patrick Spence took the job of CCO at Sonos *

Patrick Spence worked at RIM for 14 years. His most recent position was Executive Vice President of Global Sales, reporting directly to the CEO. For a guy who is under 40, this is a prestigious position to hold. He climbed up the ranks at RIM quickly.

I've been a fan of Patrick. He was a visible public face for RIM. He has broad, global sales experience, and having held at least two regional VP positions (Asia Pacific and North Amercica) over his years at RIM.

So why did he quit? And what does it mean for RIM? I'm not sure what the right answer is yet. I chatted last night with a few folks who follow RIM closely and it seems everyone is still digging for the truth.

We know that Spence was recently promoted to EVP of Global Sales, reporting into the CEO. We also know that Thorsten Heins quickly announced the intention to consolidate all chief operating officer activities under one executive, rather than RIM's tradition of having multiple COOs. Spence knew that this would mean his position would report into the COO, not the CEO. Would this be viewed as a demotion? Or worse, did he want the COO job? It's entirely possible that he did, and left as a result of not getting the job.

But I'm still left wondering why he left. Does he believe in the future of BlackBerry 10? Does he believe RIM's market share will remain relevant in the industry? The fact that he's quit makes you wonder if, perhaps, he's not confident. And as an investor, I'd be foolish to ignore the signals put out by senior management departures. This is one of those signals.

Maybe he does still believe in the future of RIM but lacks financial upside? Former RIM executives that I've spoken to have suggested the company has become very sparse with stock option grants. Perhaps Spence's options are so underwater at this point that even a huge comeback by RIM wouldn't create much of a pay day? I wanted to find out the answer to this question before posting this editorial, but the SEDI website ( System for Electronic Disclosure by Insiders) wasn't cooperating. When we get the info we'll post an update.

Finally, we still need to understand if Spence's departure will hurt RIM. Again, this is not entirely clear. As much as I like Patrick, I don't know if he was an effective executive. He was in charge of global sales during the launch of BB7, which hasn't exactly been the blockbuster RIM hoped for. This doesn't mean he was responsible for the weak market demand for BlackBerry 7, to be clear.

I also question how much value a RIM lifer can bring to the company beyond a certain point. Spence's experience at RIM may now be more valuable to another company than it is to RIM. This is similar to how Jim Balsillie's value to RIM declined over time, to the point where many feel he did more harm than good.

While it's tough to draw specific conclusions about Spence's departure at this point, I see it as a situation where he either wanted a C-level job and didn't get one, or wasn't financially incentivized to stay, or lacked confidence in BlackBerry 10. Despite his rapid rise through the ranks at RIM, it's not always bad to get fresh blood at the executive level. But right now, on balance, I see this executive departure as a negative for RIM.