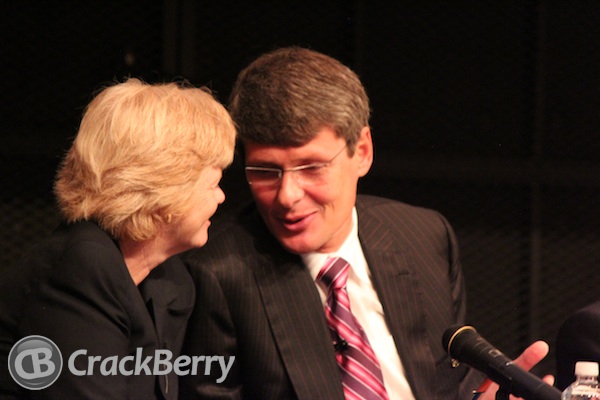 Not too long ago, Kevin and I quarterbacked a very long article about Vic Alboini, and his crusade for change at Research In Motion. While we were not fans of his methods, nor do we necessarily understand his true motivations, we definitely agree that RIM's board of directors needs a shake up.

In short, RIM needs a board that can add more value for shareholders. Collectively, the current board doesn't have enough knowledge on the things that matter so much to RIM these days. This includes technology, software, and the rapid pace of change in the mobile industry.

At RIM's Annual General Meeting (AGM), many board members had a high percentage of votes withheld during board member re-election voting. The highest withholding ratio was just over 30%, which speaks volumes as to how many shareholders do not approve of the current board.

RIM's chair, Barbara Stymiest, has also publicly said they're looking to expand the board with new blood. But they didn't say they want new board members to replace old ones, which is what we believe should happen. Out with the old, in with the (better, smarter) new.

But the magic question is "who?"

In the past, CrackBerry suggested bringing on a guy like Jon Rubinstein (the former CEO of Palm who also worked at Apple) to lead BlackBerry USA. But if that isn't going to happen, what about bringing Rubi onto the board of directors?

How about Jeff Bezos, the rock star CEO of Amazon.com? They can't get him (because he's already on Apple's board), but Reed Hastings, CEO of Netflix, would make a great addition. How about Niklas Zennström, the well known Swedish founder of Skype, and before that, Kazaa. Talk about a proven entrepreneur and business man who understand where the market is heading!

I'll also suggest that RIM doesn't actually need rock star directors either. Heck, it would be a big improvement just to bring in people who are NOT so well known, but who really understand the industry. There are plenty of quality executives and company founders who have done business with RIM throughout the last decade, and who can bring more value to the table than RIM's current slate of board members.

What RIM shareholders need is a board that understands how to ask the tough questions, analyze the right metrics and push for the tough decisions. Beyond that, any rock star names on the board would also bring powerful relationships on which rely for added leverage when it comes to partnerships and other business deals.

Let's turn this discussion over to CrackBerry Nation. Who do you think would make a good board member? If you're going to vote for Kevin, we need to at least push him to cut his hair, right? ;)

Being totally serious ... who do you want to see join RIM's board? Sound off in the comments.