WooHoo! My happy day is here! If you're a regular reader of CrackBerry.com you'll know I have a thing for white BlackBerrys. I'm not quite sure why... maybe it's the exclusivity (you don't see that many of them); maybe it's that white goes with summer; or maybe it's just the fact a BlackBerry in white seems so wrong but just looks sooo right. Whatever the reason, at least I do know i'm not the only one who thinks this. On a recent CrackBerry poll, 35% of respondents said if the BlackBerry they already owned or were going to buy next were available in both white or black at the time of purchase, they would get it in white.

You can watch the video above (be sure to watch in 720HD!) and check out the photo gallery below to get a good look at my white Rogers BlackBerry Bold 9700. I love it. It's beautiful. But while I'm super excited and happy with my new WhiteBerry, I have to admit there were a couple things I'm not 100% pleased about and just think RIM (and Rogers in this case) could do better with little very effort to drive home a better out of the box experience.

The Good: Before we get to the bad, I wanted to highlight one of things I really like these days in BlackBerry-world... and that is changing over my BBM contacts to a new device. For whatever reason, I don't like to use the BlackBerry Destkop Manager device switcher thing - I prefer to treat a new phone like a fresh start and use the Advanced Backup to move over the specific databases I want transfered (password keeper, address book, trusted certificates, etc.). All works fine and dandy if you do it that way (and I'm sure most people don't). I used to use this method for moving over my BBM contacts as well, but it always seemed to be hit or miss as to whether my BBM contacts would automatically get my new pin updated. It's a process that people historically have messed up all the time (when people buy a new BlackBerry they're always re-requesting your or emailing to add their new pin). But with BBM 5.0, I just backup my contacts to my microSD card, put the new card into my new device, and then restore the contacts. It seems to take a few minutes for everything to come up live, but with no hassle to my BBM contacts they all have my new PIN like magic. Of course, you can also backup to an email account too.

The Bad: The quality control on my white Bold 9700 doesn't appear to be quite up to standard, at least compared to my black Blackberry Bold 9700. Two things here that are irking me... for one, at the bottom of the keyboard below the "chin', there's a small gap that's just big enough to let me see the underpinnings of the chin. It's a bit sloppy. Also, the BlackBerry logo sticker on the front of the device above the display is just a tiny bit crooked (it's higher on the right than the left - not bad, but I notice it immediately). Finally, the last thing that irks me is the location of all of Rogers pre-loaded apps. It's messy. It's like they toss it anywhere into the homescreen ribbon of icons. Who wants the My Account on the first row?? Why stick Zoompass on the third row?? They should really have a Rogers Folder or at least place these in places that are less aggrevating. A lot of new BlackBerry owners don't even realize you can move/hide icons, so instead they just have messy homescreens with inefficient icon utilization.  Not really a bad thing but a sad thing, the white Bold 9700 from Rogers that I received was loaded with OS 5.0.0.351. Ancient! I immediately installed OS 5.0.0.656 which is much better (good OS build in my opinion! get it here). I really wish RIM was in control of pushing out OS updates rather than carriers.

Room to Improve: When it comes to buying a smartphone in a different color than the norm, it's all about looks. That said, I wish RIM paid a little more attention to this. Take a look at the photos or videos. See the nice white wallpaper (download it here) I added in? It immediately makes the whole device look nicer. I understand that Rogers would want to push their Rogers homescreen, as other carriers would, but that shouldn't prevent RIM from pre-loading some color coordinated wallpapers and even a color coordinated theme to match the color of a device. RIM needs to improve their consumer appeal. This helps. It's easy. Just do it. If any theme developers out there are reading this, I'd love to have a theme exactly the same as the default one, except with more of a white background on the homescreen ribbon instead of the blue fading to black one. For devices like the new Pearl 3G, they should have wallpapers and themes that match the device color pre-loaded out of the box. I actually suggested this idea to the VP of Product Marketing back at WES in Orlando, who thought it was a solid idea, so let's hope we see this happen sooner than later!

That's it! My white BlackBerry Bold 9700 is ready for primetime.  It looks wicked. It even got the stamp of approval from Miss CrackBerry - she's already waiting for me to get a new BlackBerry so I can hand this one down to her. :) 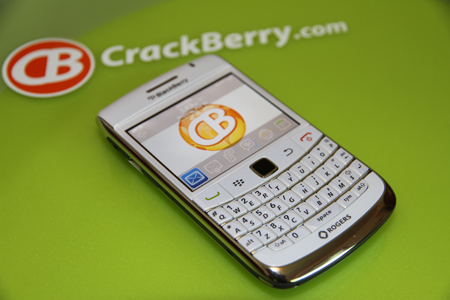