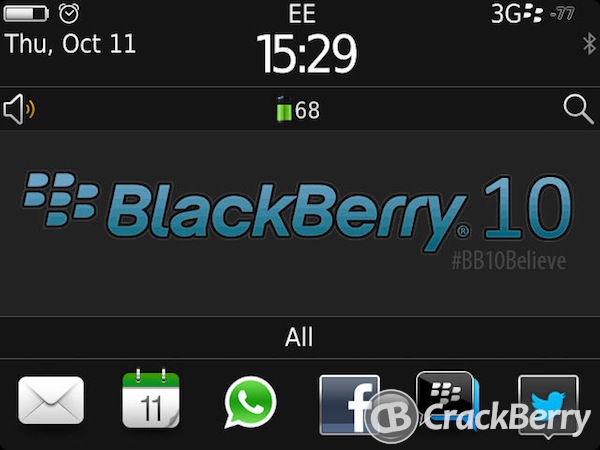 You may remember from late last month that we told UK BlackBerry users who are on either Orange or T-Mobile that their network provider name would switch at some point on their BlackBerry to EE. For those of you that are not aware Orange and T-Mobile are owned by the same company who have recently been re-branded from Everything Everywhere to plain old EE.

Just today I got a text message from Orange telling me that when I reboot my device I would then have the new EE name on my phone instead of the current Orange one. So I switched my mobile network off and on again and hey pesto there it was - EE.

But then one thing struck me. Because Orange and T-Mobile share cell sites - as a customer of either network you automatically roam onto the cell tower that is emitting the strongest signal. Being a bit of a geek I like to know which one I am on and up until now it has been easy to see. Orange BlackBerry customers phones will show 'Orange -T-Mobile' if roaming on a T-Mobile mast and vice versa for T-Mobile customers. However, now with my BlackBerry just showing EE as the network provider I was concerned that I wouldn't be able to see which cell site I was on.

To most people this really won't matter but to some it may do? The bad news is that on a BlackBerry there isn't a way to tell. I spoke with Orange today who advised me that the BlackBerry will only show EE and you will be using the cell site which provides the best signal strength for you.

Initially I was a bit gutted as where I live I don't have the best Orange signal. I normally roam onto T-Mobile and I like to make sure it stays that way as it can affect battery life. But then I remembered something - I can check the signal strength on my BlackBerry by using the secret code.

If you are in the same predicament as me (or you probably don't care) you can hold down the 'alt' key on your BlackBerry and press the letters 'N, M, L, L'. This will then remove your coverage bars from the top of the BlackBerry screen and instead will show you your dBm. (Reverse the proceedure to get the bars back) Now I'm not going to get too technical with you but dBm is the signal power in decibels and it gives an indication of how strong your signal is.

So for my benefit I like to keep the dBm showing on my BlackBerry as by seeing the real signal strength I can pretty much tell if I am on the Orange mast or the T-Mobile one. -77 is good for me (on T-Mobile) but if I hit -101 for example I know I have moved to the Orange cell tower for some reason. So as it stands at the moment Orange and T-Mobile still have seperate cell towers but gradually we will all have just one network provider instead of the option of two - not a bad thing I suppose.

I hope this comes in handy as from experience if my signal strength is low my battery drainage rate tends to increase.