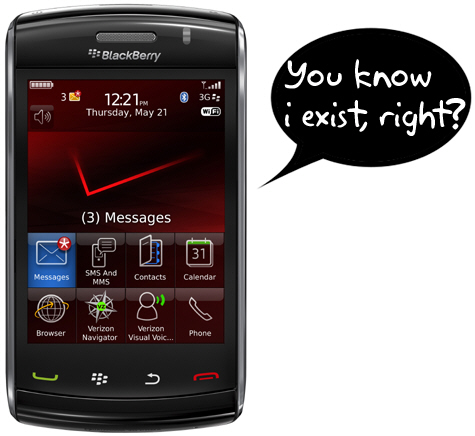 Since the BlackBerry Storm2 made is grand debut early Thursday morning via a handful of embargoed reviews, its appearance on BlackBerry.com and a joint RIM/Vodafone Press Release, I can't click into the forums, read a blog post comment or check my inbox or twitter without seeing the question Where's Verizon's BlackBerry Storm2 Announcement? I don't have an 'official answer' to this nagging question, but between logical reasoning, a bit of tipped info and putting the pieces together I do think we have a pretty clear picture of what's going on here...

First off, we heard from a couple sources now that as of last Friday (not yesterday, but rather October 9th), that the BlackBerry Storm2 had not yet cleared Verizon's TA (technical acceptance) process. As we've come to learn from the past year of waiting for Storm OS updates, it's typically on Fridays when Verizon gives RIM either the thumbs up or thumbs down on the latest OS build they submitted the week previous.

Looking back at how the Storm2 launch has unfolded so far, it's pretty obvious that in advance of October 9th, the original plan was for the BlackBerry Storm2 to get announced by all parties (RIM/Vodafone/Verizon) on the 15th. Following Verizon not TA'ing the Storm2 on the 9th, however, Big Red decided to change the game plan, taking the stance that they won't announce the device until it passes their technical acceptance. After the botched original BlackBerry Storm launch, why take the chance right?

Two observations back up the theory:

1. Verizon never fired off a press release Thursday morning like Vodafone did, nor have they announced the device since. Not a difficult observation to make.

2. Where were the rest of the BlackBerry Storm2 reviews? To be dead honest, when I received my review unit on Wednesday the 14th in the early afternoon, I was a bit unhappy at how little time I would have to use and review the unit, considering the embargo was to lift less than 12 hours later (plus I've been sick all week and was in no mood to rush-write a review). But when 12:01am hit, I was surprised and confused to not see similar reviews pop-up on some of my other favorite tech sites like Engadget, Gizmodo or Boy Genius Report. Afterall, in the past when I have received a review unit under embargo, typically these publications and many others have received review units as well, which I fully expected that to be the case here too. Once RIM puts a device up on their website, they want everybody talking about it. So I went from being unhappy about a rushed deadline, to realizing I was one of the lucky few to get a BlackBerry Storm2 early. Last year we were on the other side of the fence though when on October 8th the first hands-on reviews of the original BlackBerry Storm surfaced and we didn't have one yet to touch.

When it comes to review units, it's my impression that typically it's not just the manufacturer that decides who's getting a review unit, but also, and more importantly maybe, the carrier. Afterall, while the manufacturer provides the hardware it is the carrier that is supplying the voice line and data plan on the review unit, and ultimately that's who is selling the phone and thus have say in the matter (you buy your device from the carrier, not the manufacturer). From past personal experience, it can also be the carrier that lets you know when your review unit trial period is ending or if your data consumption seems a bit excessive (my bad - we don't officially get Slacker in Canada yet so just had to try it for a few days while roaming from a US carrier!).

Back to the question at hand, my theory is that once Verizon denied the Storm2 of technical acceptance on the 9th, they decided to cut back on the number of review units to be sent out from what RIM/Verizon would have normally planned. But with RIM and Vodafone still making their announcements on the 15th, Verizon had to get at least a few units out there, even if last minute, just so it wouldn't be only Vodafone BlackBerry Storm2 9520 reviews popping up. As I made note in our BlackBerry Storm2 Review, I was told that the firmware on the Storm2 9520 wasn't the final build that would ship on the device (again, further collobarating what I heard from other sources about the S2 not passing TA the Friday before).

I haven't heard yet from any sources whether the Storm2 cleared Verizon's technical acceptance yesterday (Oct. 16), but am guessing that once it does a whole bunch more Verizon BlackBerry Storm2 review units will be shipped and reviews will be plentiful as they should be. I don't have a reason for why CrackBerry.com was in the group of the chosen few for the early review while other deserving sites may have been left out, but obviously am very grateful so we could deliver an official Storm 2 review to our readers. Had we not received a review unit, I'm not even sure in a situation like this who you'd lay the blame on. If my assumptions above are right, reaching out to RIM likely wouldn't get anywhere as they wouldn't comment if it was Verizon holding up the show, and reaching out to Verizon probably would lead to finger pointing at RIM since they're holding up the show by not yet providing a device that passed technical acceptance.

In retrospect, it was probably intended for this whole event to play out a lot smoother. Either Verizon could have just announced the device on the 15th without technical acceptance yet (and sent out review units to everybody and just made sure to note that the firmware wasn't final; final firmware or not the device is a huge improvement over the original BlackBerry Storm), or after Verizon didn't grant the Storm2 technical acceptance on the 9th, all parties could have just postponed the Storm2 announcement for a week or two. But hey, what do I know? I'm just a guy who loves (like really loves) his BlackBerry(s) and forgets to proofread his blog posts half the time while these are billions of dollars corporations doing their thing.

At this point, I think Verizon just needs to announce the BlackBerry Storm2 already. We all know it exists and is coming to Verizon, right? I'd appreciate it. Though I do love getting emails and tweets and reading forum posts and blog post comments, I'm tired of reading the same question constantly.

Oh, and one last note for those jonesing to buy a Storm2 the day it comes out. We've been seeing a ton of info that keeps pointing to an Oct. 21st release date, but keep in mind that it usually takes a couple weeks after a device passes technical acceptance before it's available in a store for purchase (flashing a few hundred thousand + devices with final firmware takes some time and effort). Regardless, I'll keep my fingers crossed that it goes on sale soon. But really, I'd be happy with just an announcement already!