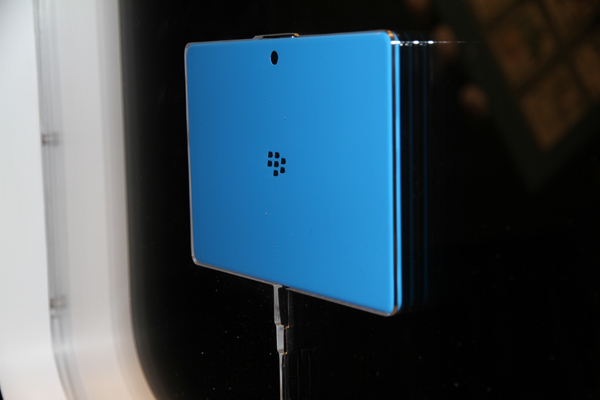 Back at the 2010 BlackBerry Developer Conference where the BlackBerry PlayBook was officially announced, RIM had both black and blue units on display (embedded within glass - click here to see our historic "first hands-on playbook" video). As a fan of gadgets that don't follow the traditional dark/black motif, the blue teaser unit gave me hope that RIM would launch the PlayBook with more than one color choice. Unlike phones where the traditional physical keyboard allows you to spot a BlackBerry at 400 yards, tablets sort of all look the same, so I was thinking RIM could really differentiate themselves in the space by taking a more colorful and dare I say playful approach on their hardware casing, which based on its fairly straightforward design one would think would be relatively easy to change up the colors on.

With no other colors announced for the BlackBerry PlayBook to date, it's looking like RIM is going to market with the good 'ole Henry Ford approach (you can have it any color you want, as long as it's black!). I guess it's not too big a deal as for those who want color as we know a ton of brightly-colored BlackBerry PlayBook cases will be available. Despite that being the case, I'd still love to see RIM offer the PlayBook in more colors. Am I alone here, or who's with me??? What color would you want to see RIM release the PlayBook in next? White? Blue?? CrackBerry Orange???

If cases are not your thing and RIM doesn't release any followup colors of the PlayBook anytime soon, I did follow up with the folks at ColorWare to see if they'd be offering custom paint jobs on the PlayBook.  They haven't announced anything yet, but promised CrackBerry readers will be the first to know when they do.