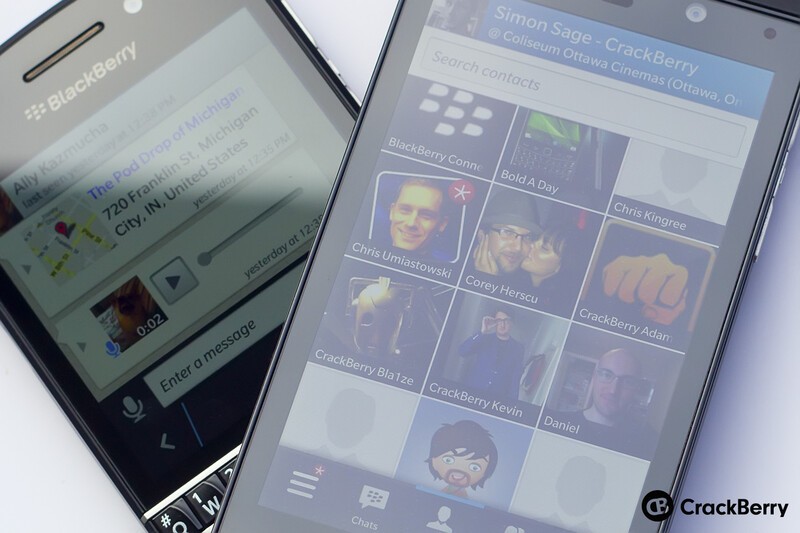 For many, WhatsApp has become the standard way to chat with friends. Sure, there are more pervasive networks like Facebook and Google Talk, err, Hangouts, but WhatsApp has in no uncertain terms filled the gap of a cross-platform BBM over the last couple of years. Now that that BlackBerry Messenger is finally launching on iOS and Android, will WhatsApp automatically become defunct, or do they have too much of a head start at this point for BBM to catch up? We’re going to put BBM and WhatsApp head-to-head to figure out which comes out on top.

WhatsApp creates an account based on your phone number. On the one hand, this is helpful since you don’t have to mess around with passwords; when setting up on a new device, it just sends a verification SMS to your number and the app scans for it. For friends that already have your number in your address book, this works out really well - WhatsApp automatically shows them that you’re on WhatsApp too. On the downside, this also means that you’ve got to give out your phone number when adding brand new friends. You've also got to pop your SIM card into a new device when switching before you can set up WhatsApp. This can be a hassle if you're using a secondary phone or SIM temporarily. iMessage suffers from a similar anchor to phone numbers.

BlackBerry Messenger by contrast leans on PIN numbers. Though these were traditionally tied specifically to BlackBerry devices, now anybody starting up on Android or iOS will get their own unique PIN numbers too. New users also sign up for a BlackBerry ID, which provides more traditional e-mail-based log-in to BBM. Unfortunately, unlike WhatsApp, you’ve got to start building up your BBM contact list from scratch. If you’re switching devices, you can back up your contact list to the cloud then remotely restore it on the new device thanks to BBID however.

It’s important to remember that adding a WhatsApp contact doesn’t just mean you need someone’s phone number; you also need them in your device’s address book. This can be convenient or a pain depending on who you’re trying to add. If it’s a friend you’re already close to, super. If it’s someone you don’t expect to be talking to a month from now, it’s a hassle. That said, WhatsApp has a full contact blocking mechanism in place, just like BBM.

Of course, if that contact has your phone number, harassment over SMS and even voice calling is just a stone’s throw away. Plus, if your friend switches phone numbers, you may find strangers creeping into your contact list as complete randoms grab those old numbers and sign up for WhatsApp. It also means you’ll have to build up a new contact list if you need to switch numbers for whatever reason. At least WhatsApp has a way to mark contacts as favorites for easy access, which BBM can’t claim.

Though BBM contacts can be linked to those in your native address book, they aren’t dependent on it. Though it’s easy to think that adding contacts might be a hassle with cryptic PIN numbers, it’s actually pretty easy between NFC, barcode scanning, and straight-up e-mail invites. Neither service has a tag system in place for organizing your contacts into, say, work and personal groups, though group chat is present in both - more on that later.

The core of both experiences is text messaging. Both rock typing and delivery receipts, though in slightly different ways. As you may have heard before, one check in WhatsApp means the message was delivered to the server, and a second means that it was delivered to the sender - not that they've necessarily read it. Though WhatsApp lets you know at the top when the last time was that a user had checked their messages, strictly speaking, only BBM has read receipts which is a huge bonus. You can see that your message was successfully delivered and when it was read by the recipient. Both services have group chat, chat archiving, and chat clearing, which can be equally important.

BBM has a few extras tied in when it comes to messaging. Conversations can be copied to share elsewhere and e-mailed. Depending on the kinds of conversations you have, these might be features you’d actually prefer to be skipped, but for most folks it’ll come in handy.

WhatsApp only shares pictures and video files, while BBM allows users to swap any file type. Both platforms can send contacts and location, too. BBM also allows groups of people to share images, but no other file types, unfortunately. On the upside, group pictures on BBM have robust caption, comment, and upvoting mechanisms.

Both BBM and WhatsApp support group chat, but BBM’s offering is decidedly more rich. Both allow sharing of images to a group, but curiously, BBM Groups doesn’t support video, location, or contact sharing. Meanwhile WhatsApp maintains file sharing parity with one-on-one chat. BBM makes up for the discrepancy with shared to-do lists and events, plus a much more fleshed-out user interface for accessing all that content. Groups on BBM can also host multiple separate conversations, which is great for larger groups.

The real clincher for group chat on BBM is BBM Channels. This allows users to anonymously subscribe to channels which broadcast all sorts of content at them. Direct chat can be enabled between channel owners and followers too, which is great for promoting engagement and handling stuff like giveaways or "office hours". Channel owners get metrics on traffic and a web interface for publishing updates - perfect for brand owners looking to reach a new demographic. Though Channels won't be available on Android or iOS versions at launch, they should be arriving shortly thereafter.

Both WhatsApp and BBM support the sending of audio snippets recorded directly from the device. WhatsApp certainly wins out in its implementation of voice notes, but that’s trumped pretty quickly by BBM Voice. The quality of real-time VoIP on BBM is fantastic - in fact, it makes me wish I got more BBM Voice calls. Also, despite having a very snappy-looking push-to-talk implementation, voice notes sent cross-platform on WhatsApp were a little on the laggy side.

Though you can share video files back and forth on WhatsApp, there’s no live video chat. Again, BBM wins out with stable video chat, and the newer addition of screen sharing. That’s not coming to other platforms just yet, but it’s on the way.

BBM comes with 90 core emoticons. WhatsApp blows that out of the water with 189, though, at least on a BlackBerry, BBM has access to about 600+ hidden emoticons provided you know the right code for them (or download an app which helps keep track of them).

BBM also enjoys a few other points of personalization that you won’t find on WhatsApp. For one, there’s the classic PING action, the give your friends a little nudge when they’re being slow to reply. BBM used to support multiple styles of chat bubbles, that hasn’t made the leap to the BB10 version yet. WhatsApp, however, lets you swap in custom wallpapers for your chat windows, which is a nice touch.

Both WhatsApp and BBM feature native blips in the notification tray, as well as options for tone, LED and vibration for incoming messages. I’ve found on BlackBerry WhatsApp’s appearance in the Hub is inconsistent; your mileage may vary with Android and iOS notifications.

Both BBM and WhatsApp have a profile structure in place that supports custom status messages and profile pictures. BBM wins points for a busy icon option, and optional updates for what music you’re listening to in the native music player. Finally, BBM profiles can also link up with apps, providing a sampling of what you use to anyone looking, as well as more practical functions, like updating your status with your latest Foursquare check-in. WhatsApp has an impressive selection of preset status messages, but that’s about it.

After all of that, is there a clear winner? Well, assuming the iOS and Android versions keep feature parity with BB10 (aside from stuff like channels and screen sharing for the time being), I think it’s safe to say BlackBerry Messenger is going to do just fine competing with WhatsApp. WhatsApp has had the time to polish its user interface, build a strong installed base, and start implementing a mostly-complete feature set, but service is still spotty, and lacking in forward-thinking features.

Between the robust groups set-up, solid messaging foundation, and upcoming screensharing, video calling, and voice calling capabilities, BBM is going to be hard to beat by third parties, and in some cases, by first parties. All of the current features of BBM on BlackBerry like voice, video and screen sharing will be on their way to other platforms in the very near future, so it will make BBM stand even stronger. The only real challenge for BBM is getting those comfortable with existing networks to switch.