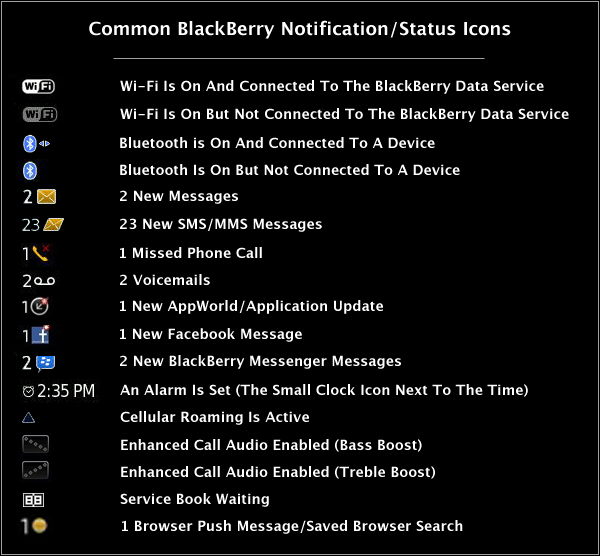 When you become a BlackBerry owner, it's like you learn a whole new language. Not only is there new terminology to learn, but your screen will soon be home to all kinds of icons and notifications. Most of them are pretty self-explanatory, but others aren't so obvious to new users, and sometimes getting rid of notifications can be just as confusing.

The picture above has been floating around the forums for quite some time (thanks to ifarlow for putting it together way back when), and those of you running older OS' are likely familiar with several of them. For the most part, notifiers haven't changed a whole lot from OS to OS, though there have been some notable changes. After the break you can see a list of more recent notifiers, from OS 5-7, as well as a list of several things that can have an effect on how notifiers look on your device.

Clearing notifications from your screen can sometimes be confusing. Usually, opening the app that the notifier pertains to will clear it out. If it's an email, SMS, or BBM, you will need to actually open the message, or use the 'mark all read' function from the menu. If you find yourself with a random notifier that you can't seem to find, a good place to look is in the combined Messages folder. Selecting 'U' will take you to the first unread message, so if there is one hiding in there, you should be able to find it and clear it out. Of course if you've done all you can and it's still not clearing, a battery pull or soft reset will sometimes take care of it.

For a complete list of icons and notifiers you can check out the OS specific icon guides at the links below.