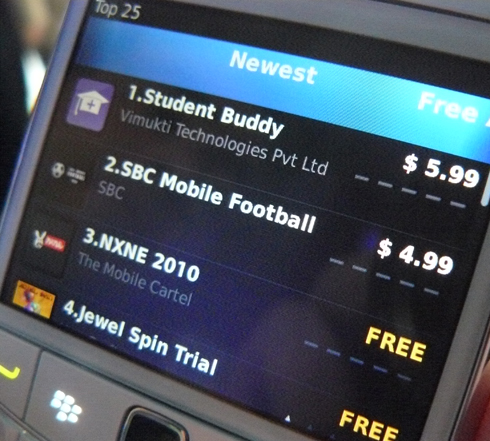 Yesterday I attended a BlackBerry App World event in New York City, and while there was no huge announcement, I did get a chance to check out BlackBerry App World 2.0 in person. The long-overdue update will include some great new features, some of which we noted yesterday. Perhaps the biggest is the addition of carrier billing. Users will be able to choose to bill the app to their carrier (providing it is supported), PayPal or credit card. There is also a new feature called BlackBerry ID that allows you to easily take your account from one device or another. As many of you have found at first hand, you can currently only use App World on a set number of devices before it won't let you download apps (Bla1ze knows this well). With this new feature, you will be able to login to App World and use it on whatever device you choose, so if you swap devices often you won't have a problem.

The layout of items within App World has been tweaked now as well. Added are Newest Items and Top Themes categories, and you will be able to view items and simply scroll sideways to change categories. So you can easily go from new apps to top selling to top themes just by swiping sideways, and the app will remember your position in each category. In the "My World" section of App World you will also have a Pending Downloads area which will house items that you have marked for download from the app or web.

Overall some good things on the way with the new release. Still no official word on when it will be available, but we're hoping for sometime in the next few weeks. This is a much needed update so we'll welcome it with open arms. Unfortunately my photos tunred out a bit blurry, so thanks to Al Sacco for letting me borrow some of his. Some more shots after the jump.