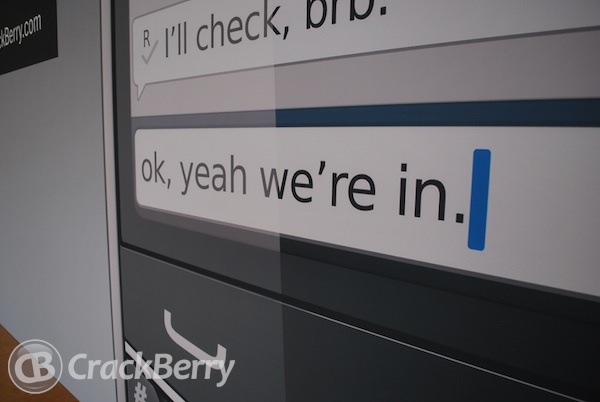 For quite some time now, I've been a firm believer that RIM should release BlackBerry Messenger on other platforms. At first I wasn't sure if they should. But smarter people convinced me.

Over the weekend Kevin and I got to talking about this. We bounced around a few thoughts, and he suggested this would make a great "what if" editorial topic. With is hectic schedule managing the Mobile Nations business, I get to be the one to write it up.

What prompted this conversation? WhatsApp. That's what. Ever since the startup company launched their multi-platform messaging tool, CrackBerry Nation has been watching its progress.

Calling the growth of WhatsApp "progress" feels like calling Hurricane Sandy "a bit of a storm". They've gone from transmitting 1 billion messages per day in October of last year to over 10 billion messages per day in August 2012. This metric comes from a corporate tweet, in which they announced a new record of "4B inbound, 6B outbound = 10b total messages a day!" It sounds like they are counting a send and a receive as 2 messages, so I'll treat this as 5 billion daily messages. Still, it's a LOT.

Compare WhatsApp to BBM. RIM has 60 million BBM users, according to their most recent metrics. The average BBM user would have to send 83 messages per day to match the volume of WhatsApp. I don't believe the average is anywhere close to that high, so it seems to me WhatsApp has a far greater user base than RIM. It's also much bigger than iMessage considering Apple claims to have handled a cumulative total of 300 billion iMessages (since its launch).

That's what happens when you go multi-platform. WhatsApp is very likely the world's #1 mobile IM platform.

In my opinion, and I'm not sure if others will disagree, RIM has pretty much stagnated with BBM. The UI hasn't changed in years, though what we have seen of BBM on BlackBerry 10 does look pretty solid. Very few important new features or innovations have happened this decade. RIM's big push has been trying to leverage BBM by creating APIs so that other apps could be BBM-connected. I'm not convinced it has helped them grow their user base. Meanwhile, WhatsApp has improved its initially-lacking service by adding their version of Groups, which has been one of BBM's biggest differentiators. WhatsApp groups now allow for up to 30 people, and you can share pictures, videos, audio notes, contacts and locations.

I also see the size of the user base as being FAR more important than the feature set. Look at SMS. It's basically one feature. Text. Yet the user base is billions, because it's a global standard. The value of network size is well documented. Just look at Metcalfe's Law, which states that the value of a network is proportional to the square of the number of users on that network. Double the users? Four times the value.

WhatsApp grew while being inferior to BBM. In fact the app has been outed as being totally insecure over Wi-Fi. Unless they've fixed the problem, anyone with a rooted Android app can sniff your conversations. While people should care about this kind of problem, sadly most do not even know about it. They're too busy chatting. Even those who are aware of the security risk are likely to ignore it because the perceived downside of not using the app to connect with friends is worse than the perceived risk of being spied on.

Many BlackBerry users are making the switch to WhatsApp or other cross platform IM clients (Kik, Hookt, etc.) to be able to chat with friends on non-BlackBerry hardware. But some simply grew frustrated because of the big network failure that hit RIM in Europe. BBM was down for several days for many users. Was this the proverbial straw that broke the camel's back?

Kevin shared a story with me from his future brother in law, demonstrating this problem. He moved to Spain for a year to complete an MBA. When he got there, he observed that most people were using BBM. By the time he left, there had been a sweeping shift towards WhatsApp. From his observations, the recent BlackBerry service interruption that affected Europe served as a catalyst allowing many to abandon their BBs, and from there began to rely on WhatsApp to fill their BBM void with the BBM group functionality they were used to.

Simply put, BlackBerry Messenger is no longer king of the hill. Even with 60 million users, many of these users also use WhatsApp to chat cross-platform, and it seems quite clear from the math that WhatsApp has a larger installed base. Jump into App World right now and you'll see that WhatsApp is the #1 downloaded free BlackBerry app. BBM may have best-in-class features and speed, but WhatsApp definitely appears to be good enough for the masses.

Platform specific apps such as iMessage and BBM have definite value. But they seem unlikely to win out over cross-platform tools. Even Microsoft has taken this into account with Windows 8 by creating the concept of "rooms". Snap that photo of your cute toddler and want to share it with family? No problem. You can send it off to all contacts defined as family and it works across multiple platforms. Want to share a calendar? Same thing.

And of course Microsoft owns Skype, which is already cross-platform. I wouldn't be surprised if Microsoft merges its Windows 8 rooms with Skype functionality for even better cross-platform leverage. After all, Skype is gigantic and at peak times they host over 40 million users online. They merge the desktop world with the mobile world, which is something iMessage does, but WhatsApp and BBM do not.

So now it's time to ask the hard questions. If RIM had taken BlackBerry Messenger to Android, iOS and even Symbian over a year ago would it have helped device sales? Or would it have acted as a catalyst, speeding up defection away from BlackBerry? We are interested in your thoughts, so comment away.

I firmly believe a cross-platform move would have helped. Obviously, for those who already abandoned BlackBerry, the downside of losing BBM was not enough to stop them. When enough of the influencers leave, the rest follow. Being cross-platform could have stopped a lot of bleeding in my opinion.

Kevin also proposed (and I agree with the view) that cross-platform BBM would have saved RIM a lot of brand tarnish in the USA. Having a kick-ass IM app that was respected on iOS and Android would be a good thing. So even if device sales still lagged (likely), at least the BlackBerry brand would be more intact. Jump into Apple's App Store and at any given moment you'll see WhatsApp as the #1 or #2 top downloaded app. Had BBM gone cross platform earlier, odds are it would have killed WhatsApp and the rest of the cross platform IM client competitors dead before they even had a chance to grow. Instead of WhatsApp, you'd be seeing a BlackBerry logo on the top downloads list of every other app store. And that wouldn't be a bad thing for BlackBerry.

Finally, would a cross-platform implementation of BBM have given RIM more marketing muscle when it comes to the launch of BlackBerry 10? It seems to me the answer is yes. Think of all the folks, who abandoned BlackBerry, who might at least be still using a key BlackBerry application, and therefore more willing to consider switching back.

Discussing a backwards-looking "what if" scenario is tough. We'll never know the right answer. But if the reasons for RIM moving cross platform were good in 2010 or 2011, then I think they are still good today. I'd like to see RIM get back to innovating on BBM and take it cross platform.