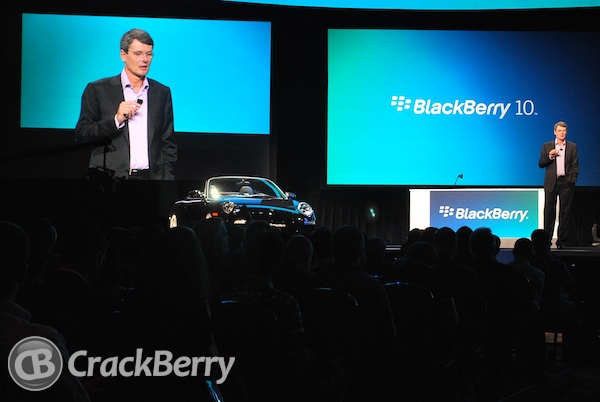 As the price of Research In Motion stock continues to slide (it's a at 2003 low of below $10 / share today), it's clear that the market has pretty much zero faith in the company's ability to make a comeback.  The market can be wrong, but it would be foolish to assume so.  As encouraged as we are by BlackBerry 10, we have to realize it may still not be enough to "save" RIM.

So with that in mind while still hoping for the best, the CrackBerry team spent some time thinking about what the alternatives are beyond Plan A, which is the upcoming launch of BlackBerry 10. What else might happen?

Obviously Thorsten and the board of directors are engaged in multiple strategic alternative discussions. They've hired not just one, but two separate investment banks to act as advisors.

Keep reading for our thoughts on what Plan B, C, D... you get the picture... might look like.

Plan B - Form a strategic alliance with Samsung

Sure, there are other potential hardware partners but Samsung seems like the strongest opportunity to us.  They've got supply chain strength that is almost unmatched, and they have ripped past Nokia's market share to become the world's largest cell phone vendor.

Samsung's smartphone volume is almost entirely driven by Android, and given Google's purchase of Motorola, this is a position Samsung might not feel so comfortable with.  Samsung may wish to diversity its positioning by adopting BlackBerry 10 at some point, but clearly this can't happen until after RIM launches the OS on the market. So it would not be a 2012 event, most likely.

We'd also like to see RIM partner with Samsung on low cost BlackBerry plans for Android, exclusively available on Samsung phones. Think about BBM, email, and other social features that are powered by RIM's infrastructure and offered to customers at low price points (significantly cheaper than general data plans).  This would be benefit for RIM and Samsung.

If RIM was to form an alliance with Samsung, it could involve the Korean firm taking an equity stake in RIM, or paying an up front licensing fee, or both.  RIM has a strong balance sheet today, with about $2 billion in cash.  But if the operating losses go on too long this strength diminishes.

Having to disclose poor financial numbers only gives the media more ammunition to shoot holes in your story.  Going private would allow RIM to hide its numbers until it was ready to go public again (if that was to happen).

Some might ask if this would change anything.  It might not.  If you're dying then hiding doesn't change anything.  But if a part of your impending death is due to public ridicule, and group-think driven by negative media messages being constantly published, then hiding can allow you to heal in private.

In the past, RIM was probably too big for a going-private transaction.  But today RIM is worth only $5 billion (and that includes the value of the company's $2 billion in cash).  Big private equity firms like Silver Lake Partners have done deals significantly bigger than this. For example, Avaya (the enterprise voice spinoff of Lucent Technologies) was taken private at a value of $8.2 billion by Silver Lake.

Private equity firms can also bring in partners.  For example, when Silver Lake bought Skype from eBay (before selling it to Microsoft), it partnered up with the Canadian Pension Plan.

The point is, RIM could be taken private.  Silver Lake is believed to have talked to RIM about this, as reported exclusively by Bloomberg

Plan D - Team up with Microsoft

This option needs to be talked about, despite the fact that we're not huge fans of it as a choice for RIM.  But, it's pretty obvious that either BlackBerry or Windows 8 will hold a spot in the top 3 smartphone (mobile computing) platforms, alongside iOS and Android.

If Microsoft is not able to absolutely crush RIM, then they may as well team up with the company on a more serious level.  Whether this involves licensing, equity stakes, or a full-blown acquisition  ... who knows.  But RIM has QNX (installed in many car platforms) and Microsoft has a close relationship with Ford.  Between the two companies, they could dominate the automotive infotainment market, which is a pretty big source of leverage.

Also, both Microsoft and RIM are pushing hard for adoption of HTML5. This makes sense since neither company has a strong platform (yet) with native apps.  So a combination of forces may, over a period of years, result in a much stronger HTML5 platform that brings with it strong developer support.

If RIM doesn't succeed on its own with BlackBerry 10 and Plans B, C and D don't pan out, it may need to completely focus its business around enterprise customers, and becoming the clear leader in mobile device management (via Mobile Fusion).

This would clearly result in RIM becoming a much MUCH smaller company, and wouldn't require them to manufacture any hardware at all.  It's not clear if they'd even need to maintain ownership of QNX and BB10 if this was to happen.

We think of this as more of a "giving up" option.  It doesn't seem very appealing on its own, unless BB10 also gets licensed out to another large manufacturer such as Samsung.  So we prefer to think of this option as living alongside one of the other options.

What have we missed?

It seems to us there are so many possible transactions that RIM could do as part of its restructuring / comeback / future path.  What are your ideas?  Let's hear them.  This is obviously a topic we're interested in following closely.