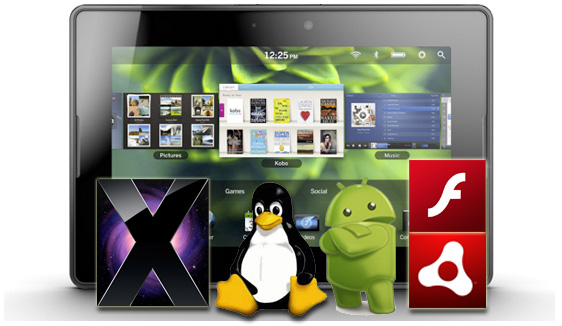 Two nights ago, I installed the leaked Android App Player on to my BlackBerry PlayBook. It was an arduous process that involved several hours of researching, finding bad or poorly worded instructions, and downloading hundreds of megabytes worth of SDK's (note the plural) and a JRE and a JDK and this and that. That's a lot of work to install a resource-hogging, semi-functional application. Nevertheless I am amazed.

I am amazed, not necessarily at the application itself, but the ideas it represents. The first is the more apparent of the two. The Android App Player doesn't just emulate or represent the Android operating system. It is the Android operating system. Android exists as a virtual machine on the PlayBook tablet. Most people don't run virtual machines on their home computers, let alone a "mere" tablet.

As best I can figure, the BlackBerry PlayBook is the first tablet to run multiple operating systems simultaneously. More than that, bringing the Android OS to the PlayBook represents a fundamental shift in the app ecosystem. If the Mountain will not come to Mohammed, then Mohammed must go to the mountain.

Research In Motion must do what it can to woo and support and nurture those customers because, increasingly, its business and enterprise customers are demanding more those apps that they create. Supporting Android apps on the BlackBerry brand means those end consumers have more choice than ever before. The Android app player has the potential to run virtually any app within the Android Market(dialers, call-blockers, and the like excluded). By definition (and again excluding phone-function apps), the BlackBerry PlayBook will support more apps than almost any Android tablet or smartphone.

It all boils down to a choice for developers. Applications on the PlayBook can be written in a variety of languages and platforms. Adobe Flash CS5 creates apps that run on iOS, Android OS, and BlackBerry Tablet OS all from the same source code. Soon, the Android App player will allow those Android developers an entirely new market to sell their apps. Purportedly, only very minor changes will be required to port those apps to multiple operating systems.

Release of the PlayBook's Native Development Kit will unlock the vast power of the C/C++ language. I do not use that term lightly. Add to that the luxurious user interfaces created by The Astonishing Tribe, baked right in to the development kit. According to QNX's Dan Dodge, applications that run on the Linux or Mac OS X platforms, should be simple to port the BlackBerry Tablet OS. In short, the PlayBook will be able to run some very powerful apps.

What this means for us

Simply stated, it means an entire catalog of apps should be on the way to BlackBerry. It means developers don't have to make a choice as to whether or not to support the PlayBook. The PlayBook will do it for them.

There may come a day when a person might ask, "How many apps can the PlayBook run?" It's not inconceivable that the answer may be, "All of them." With QNX-powed BlackBerry Smartphones on the 2012 horizon, perhaps it's also possible that this BlackBerry Choice for developers might extend beyond the company's tablet offerings.