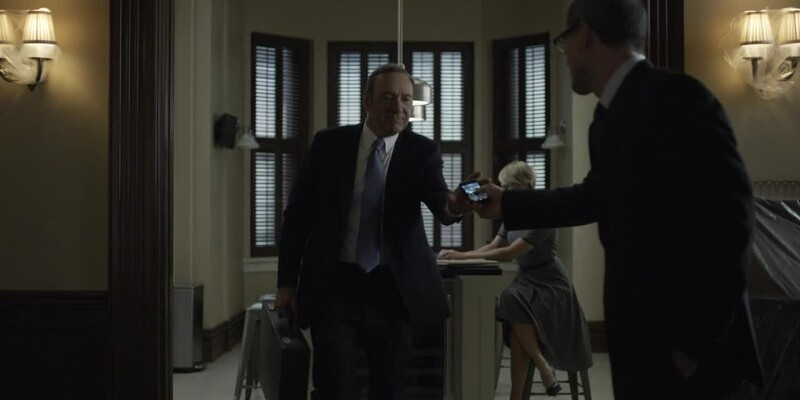 House of Cards, the Netflix American political drama starring Kevin Spacey, is now back for its second season. If you've watched the show at all you've likely noticed one thing about it, aside from the fact that it's awesome, and that's that there are a ton of BlackBerry smartphones used in the show. A recent article in the LA Times has highlighted the amount of product placement in the show in general but has specifically noted the BlackBerry and iPhone placements.

They’re smart, they’re sexy, they can break a big story at the touch of a button. They’re the women of “House of Cards” and virtually all of them have iPhones on their person at all times. Reporter Zoe Barnes gets her powerful male boss fired with a tweet from her iPhone. Claire, meanwhile, arranges illicit rendezvous with lovers and lobbyists. Don’t mess with these women when they have an iPhone present.

To be a man, on the other hand -- a real man, anyway -- you’re going to need a BlackBerry. Like Gogol’s lost nose, being without your BlackBerry for even a moment is the virtual equivalent of castration.

At season’s close, Frank makes the tragic mistake of leaving his BlackBerry behind for a few precious moments of nuptial bliss with his wife Claire. While he’s out, a huge story breaks that threatens his ascension to the vice presidency.

Peter Russo, meanwhile, alienates his constituents, struggles with drug and alcohol abuse, and is generally incompetent. But his real kiss of death is throwing his BlackBerry out the window of his car. He was killed shortly thereafter, and deserved everything he had coming to him.

BlackBerry: glue it your body or die horribly.

You may or may not agree with their assessment but there's no denying the fact that there is a ton of BlackBerry usage happening on the show. It's not the only show that features BlackBerry as well. Community is another, along with The Newsroom, Veep, and more. What other shows have you seen using a lot of BlackBerry smartphones?