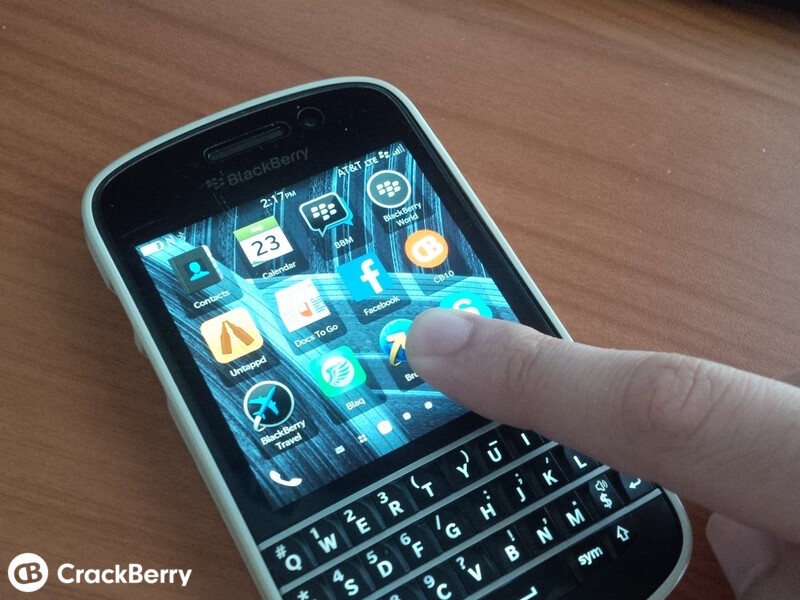 All BlackBerry devices running BlackBerry 10 have touchscreens and when a user touches things in an app they expect it do something. That means a developer has to listen for these touch events and react. Seems like a no brainer, huh? Well as a developer you need to know what code takes user screen interaction and turns it into an enjoyable and expected behavior. Obviously there is no way for me to explain every possible scenario, there are definitely major ones every developer needs to know about to successfully code a Cascades app.

Let’s start with the most basic, a Button. Button is one of the stock Cascades components. I’ve used it in many of my previous tutorials but never really focused on what makes it so it actually does something. Consider the following code:

This code will result in a Button labeled “Next Page” to be rendered on the screen. If a user presses this Button it will have nice animation of it appearing to be depressed and when the user lifts their finger it will return to its original state. These effects are attributed to the Cascades framework having built-in fanciness and don’t require a developer to code much. However, other than that nothing will happen. The same can be said for many other stock components in Cascades… ToggleButton (flips a switch), Slider (drag an indicator across a range), CheckBox (toggle between checked and uncheck icon), etc. Simply declaring these components will render them on the screen and allow for interaction but not actually “do” anything.

Back to our Button code, Cascades fires specific signal(s) when a user presses a particular component. So when a Button is pressed Cascades fires a clicked() signal and in QML to make that signal do something you'll code something like:

At this point I hope I haven’t lost anyone either from complete boredom of my obvious explanation of how a simple Button works or that you are overwhelmed by five lines of code. The idea of explaining this is while a Button component has a signal called onClicked, another stock component such as a Slider has a few signals such as onValueChanged and onImmediateValueChanged. And a CheckBox’s main signal that is fired when a user touches it is onCheckedChanged. I could go on and on for all the stock components but I think you get the idea. So be sure to learn all the signals for each stock component.

Now what about custom components or components that don’t have something like onClicked such as a Container or ImageView? Surely, there are instances where you’ll want the user to be able to touch these and have your app react. These would be possible use cases for the Gesture Handler. The Gesture Handler can be added to any component and at the time of this writing can listen for four types of “user touching”: tap, double tap, pinch, and long press.

This code will render a blue rectangle on the screen with dimensions of 200 pixels wide and 100 pixels tall. And with the TapHandler applied to it, the onTapped signal will result in it behaving very much like a Button with an onClicked signal.

Also consider in Button code, the onClicked signal will only fire if the Button is set to enabled: true (it is true by default). But say in the scenario where your Button is disabled but you wanted to provide feedback to your user if they press the disabled Button. You could apply a TapHandler to your Button and in the onTapped signal you could have a Dialog or Toast letting your user know that Button is not active. That code would look something like this:

Another and even more versatile touch interaction is that every Cascades control inherits the touch() signal. In QML you can simply call the onTouched signal and it listens for various events such as event.isDown, event.isUp, and event.isMove. Using a combination of these events within an onTouched allows your app to respond to all sorts of user screen touches such as the swiping mechanism I illustrated a few months back in my “Custom Cascades” tutorial/example app. A simple example of the onTouch signal can be illustrated by the following code:

This code will result in a blue rectangle rendering on the screen on initial load. Then when the user presses on that container the rectangle will be colored magenta. It will stay magenta while their finger is pressed to the screen and when they lift their finger it will change to cyan. While this is a trivial example you can see this is a different type of user interaction than say pushing a Button and something happens because in this case something happens when the user has the "button" pushed down and something else completely different happens as soon as the user lifts their finger.

The simple action of a user touching the screen is a bit more complicated than you may have previously thought, huh? And I hear things will only get more complicated with the Classic with focus areas and what not but that is a story for another day. With that said, that's it for today. As usual feel free to sound off in the comments with questions and/or remarks.