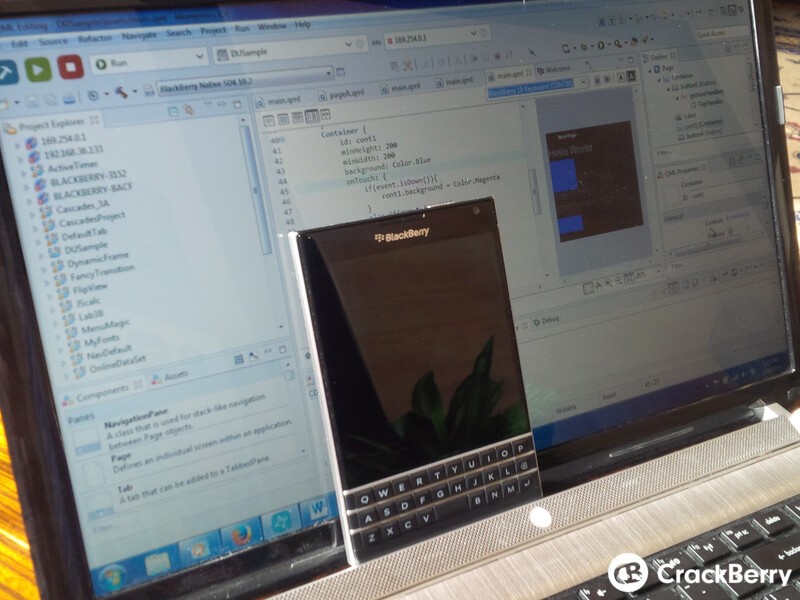 Even though we've had a square screen to develop on with Q10/5 and a big screen to work with on Z10/30/3, the Passport now brings us a combination of big and square. From an app developing point of view this may present some challenges but also brings opportunities for new UI/UX designs that just aren't possible on current devices.

Before I go into the developing side, I'd like to share a bit of my own "user side" impressions which will tie into my "developing" thoughts. I got the Passport at the launch event in Toronto and have been on the road ever since so I haven't completely switched over. This is a wide device and the very first test I did was the "pocket test"… passed! Next thing I noticed and many others have said as well, one hand operation is a bit cumbersome. The keyboard is a bit awkward and takes some getting used to. I don't mind typing typical words/sentences but using special symbols seems to take longer without being able to press "alt".

Those two negatives aside, the screen is beautiful. It is very enjoyable to create and consume content. I can't wait until next week when I am home and I can fully switch over. Picking up my Q10 after using the Passport makes me wonder how I have survived with a 3.1 inch screen.

First developing characteristic I noticed while watching the event was the demonstration of the new keyboard scrolling on pages. I believe they showed this on a document and a webpage but this also works on all other apps too. I tested this on my friend Alex's Web Design Cheat Sheet app that features mainly ListViews and they scrolled just like they show on the demo. The best part, this doesn't require any additional coding. It just works. I haven't had a chance to really dig in but I would imagine it will scroll based on the first "scrollable" item it sees. Usually there aren't multiple scrollable objects on a page but more on that later.

Next, Android apps run great. Obviously the increased specs of the Passport help and the 10.3 OS update greatly improves the Android runtime (so other devices will see an improved Android experience as many of us already know from running a leak on our Q's and Z's). Plus, the Passport adds a "zoom out" mode that reformats the Android app to fit better. But why am I talking about this in an article about BlackBerry Cascades development? I am genuinely concerned that the Android experience is so good that just the "smoothness" that native apps provide won't be enough to sway users to stay native. Don't get me wrong, I am happy Android apps run really well now. After all I am regular user too and enjoy the plethora of apps available via Android. All I am saying is native developers will need to step up their game to keep users!

Finally, I think the best response to the increased performance of the Android apps is to make "Passport optimized" apps. Until you see a Passport in person, I think it is hard to explain how much screen real estate you have to work with. And BlackBerry's "work wide" slogan is definitely true, this thing is WIDE. So take advantage of the screen. This means you can break the typical notion of action bars only on the top/bottom of the screen and instead have content side by side. This was even illustrated during the launch event when Bloomberg showed their new app:

See how they have a double set of scrolling menus (this is what I want to test, which menu will scroll when using keyboard scrolling), a ton of dead space, and then the shadowed out content. The width of the screen could allow for all three of the containers to appear at once and provide a good experience.

A few months back I speculated in the forums that the Passport should run apps side by side because a split screen allows you to have two 3.5 in screens side by side. While that doesn't seem to be true, it is possible to design an in app UI/UX that mimics this. I am not saying this is a good idea for all apps but think of how often you have a split screen on your personal computer when multitasking. The same thought process and design can be added to Passport apps. And dare I say this could completely change how we think about, develop, and use apps on our phones?

That's it for initial impressions. I am definitely excited to have more Weekend Coder articles once I dig a bit more into Passport development. And honestly this launch has reinvigorated my passion for BlackBerry Cascades developing.