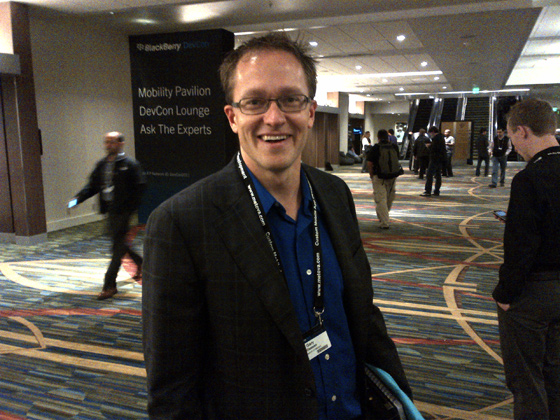 We all know BlackBerry Messenger is one of the biggest hooks the BlackBerry platform has. Research In Motion originally made its mark in the world with push email, but in recent years it is BBM that has become the killer feature the company gets the most kudos for. Especially in the consumer space, BlackBerry Messenger is the must-have application that attracts people to buying a BlackBerry Smartphone and keeps them from switching to another platform when it comes time to upgrade. I'm not going to try and calculate where RIM would be today if they did not have BBM - all I know is they would not be in nearly as good a position.

Ever wonder who actually invented BlackBerry Messenger? You're looking at him above. That's Gary Klassen, a Software Developer at Research In Motion for over 10 years now, and he is the man who literally wrote the code for version 1.0 of BlackBerry Messenger. Walking through the hallways of DevCon yesterday, I got on my knees and bowed to him after he was introduced to me as such. Seriously, this guy is a celebrity in my book. Statues should be erected in Gary's honor.

Companies are made of people and all too often it's the company itself and/or its founders who get to reap the credit for innovations produced. But I like to give credit where credit is due. And to that end, I say Gary Klassen... CrackBerry Nation salutes you. THANK YOU!!