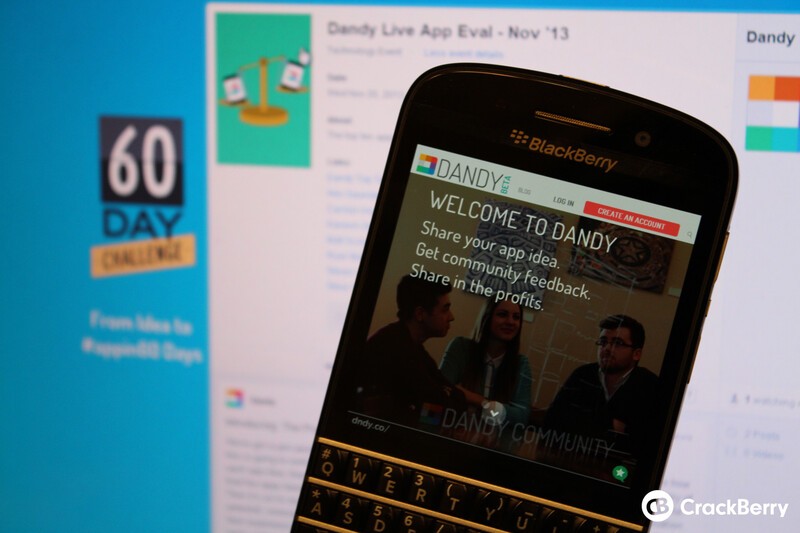 It's always nice to hear of organizations looking to help aspiring developers take their idea and turn it into a reality. The community driven, crowdsharing platform Dandy is doing just that. As part of their 60 day challenge they asked creators to submit their ideas which in turn would be voted on by the community (who share in the profits based on the level of their contribution), the site, and by experts as well, for the opportunity to design, fund, and develop into an application.

Since this is CrackBerry, one of the judges on the expert panel will be none other than Alec Saunders, VP of Developer Relations at BlackBerry.

After sifting through all of the submissions, feedback and voting, the top ten have been chosen and are ready to be judged by the expert panel at 1pm EST on Wednesday November 20, 2013. Now contrary to the press release, the organization decided to move up the date of the Live App Evaluation by one day. You can follow the live event on LiveStream.

Once a winner is selected, development begins on the 21st with a target date of January 6, 2014 for the application to not only be released for BlackBerry 10, of course, but for iOS and Android as well. To help bring this crowdsourced application to BlackBerry, Dandy has contracted Philip Kirkbride co-founder of the BlackBerry based social network Diaree.

Dandy provides aspiring app creators everywhere with a chance to have their idea developed and launched as a finished app in just 60 days. The app will be developed for the BlackBerry®, Android and iOS platforms, with the release planned for January 6th, 2014, in Las Vegas.

“We want to support anyone with a good idea, anyone who says, ‘I wish there was an app for that,’ and help make it happen,” says Matt Scobel, CEO of Dandy.  “With our development team, marketing capabilities, support from BlackBerry and BDC Venture Capital, we can help anyone with an app idea turn it into reality in a matter of two months.”

Dandy’s 60 Day Challenge asks anyone with an app idea to submit it to be voted on by the community. No technical, design or development skills are needed to participate.

The winner will be selected by a jury of technical, commercialization and marketing experts on 21st November. The app will be developed for a cross platform launch, with the launch planned in Las Vegas on January 6, 2014.

Dandy graduated from the Communitech HYPERDRIVE incubator in April 25th, 2013, and closed a $300,000 funding round on September 27th, 2013, from BlackBerry and BDC Venture Capital.

“Dandy has found an appealing way to solicit what customers can dream of in an app, and the talent to bring that app idea to fruition,” said Lynda Chau, Director of Marketing Developer Relations at BlackBerry. “We’re excited to work with Communitech and BDC Venture Capital to support Dandy’s 60 Day Challenge, and look forward to seeing what innovative ideas are submitted for mobile apps.”

“BDC Venture Capital is a strong supporter tech ventures and entrepreneurs across Canada, including accelerators such as the Communitech HYPERDRIVE accelerator. Dandy is an example of the innovation potential in Waterloo Region having taken a creative approach to mobile app development, building on the very exciting trends in crowd sourcing,” states Michael Mahon, Director of Strategic Investments and Initiatives at BDC Venture Capital. “Our investment in Dandy is part of our ongoing work to ensure the success of Canada’s most promising early-stage tech start-ups. We wish Matt and his team all the best with the launch of Dandy – they certainly have what it takes to succeed.”

Competition Milestones (dates for your diary):

Dandy shares 30 percent of the royalties with the winner of the 60 Day Challenge and the Dandy community. The royalties are divided as follows:

Dandy is a community driven crowdsharing platform for mobile app development. Users suggest app ideas and participate in voting, feedback, design, funding and development. When apps are made, Dandy shares revenue with the entire community based on their level of contribution.

With more than $1 billion under management and more than 25 years of industry experience, BDC Venture Capital is an investor of choice focusing on IT, health and energy/cleantech companies, as well as venture funds, with high growth potential. From seed through expansion to exit, our mandate is to help build outstanding Canadian companies, while working to create a sound financial ecosystem for Canadian technology ventures. Find out more at www.bdc.ca/vcor on Twitter @BDC_VC.

HYPERDRIVE is open to all early-stage technology startups from any geographic location. Companies must locate in Canada’s top technology hub in Waterloo Region, Ontario, to participate in the three-month sprint part of the program.

Dandy participated in the second HYPERDRIVE cohort, which they graduated from April 25th, 2013.