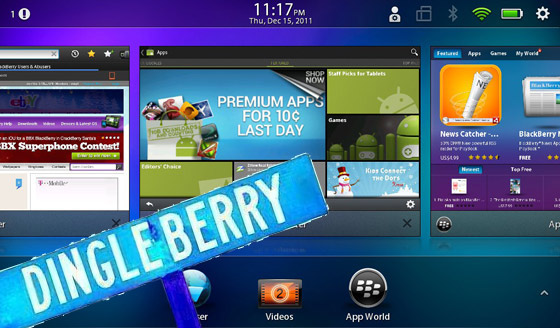 With the release of OS 2.0.0.6149 (Beta), Research In Motion successfully plugged the security hole that DingleBerry 2.11 used to gain root access to the BlackBerry PlayBook. What's more, Research In Motion also broke the Android Market by disabling Accounts & sync in the version of the Android operating system that runs-- on top of the PlayBook's OS. Even if you managed to jailbreak .6149, the Android Market - the most visible benefit of rooting - wouldn't work.

The issue boils down to the fact that OS 2.0.0.4869 (beta) is no longer available for downloading. If you somehow had access to this version of the operating system, you'd be able to both root your PlayBook and access the Android Market. Now, the folks over at OpenSourceBB have come up with a rather clever way making that version of the OS available again. They've even put up a top-notch guide to accomplishing this feat.

Essentially, you'll use the Beta version of BlackBerry Desktop Software 7 to install the operating system. At just the right moment, you'll copy the .4869 OS to a temporary folder used by Desktop Software. This will "trick" the software into installing the .4869 OS to your PlayBook. Don't worry if you didn't save a backup copy of .4869; OSBB has links to download the files.

If you've already installed the latest beta OS - 2.0.0.6149 - to your PlayBook, I would not recommend downgrading directly to 2.0.0.4869. Instead, complete a factory reset to the latest consumer release of the PlayBook's OS, then upgrade to the 2.0.0.4869 version of the operating system using the steps provided by OpenSourceBB. From there, you can work on installing the Android Market.

There are many steps now required to getting the goodness offered by the Android Market. You do have to keep in mind that we're getting the PlayBook to do things it was never designed to do. To many - including me - that's well worth the hassle. Plus, rooting your BlackBerry PlayBook at this point is worth like 80.000 Nerd-Cool points.

How to downgrade your Playbook OS using a local copy