Enter webOS Nation's "Open webOS on my TouchPad" Haiku contest for a chance to win the non-webOS device of your choice! 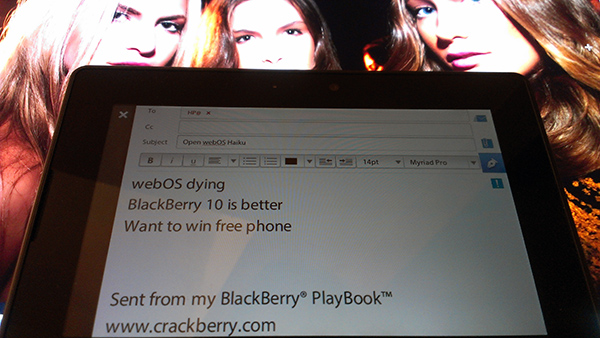 As bumpy as the ride is right now for BlackBerry users, at least things are better for us than for the webOS users over at webOS Nation.

Wayyyy better. There's still 80+ million BlackBerry subscribers in the world (and that number continues to grow), and the next generation BlackBerry 10 software and hardware is coming. Of course we'd rather it be three months away than six (or better yet, here today), but the fact that we'll see both a full touchscreen and physical keyboard model launch in quick succession somehow makes the wait seem not quite as bad.

As for the devices we have right now, at least we're still seeing support for them. The BlackBerry PlayBook just received an update this week and it'll continue to receive updates, including one that jumps it up to BlackBerry 10, as confirmed by RIM. That makes PlayBook owners happy.

In contrast, HP TouchPad owners are less than happy, as this week HP confirmed they will not create a build of Open Source webOS for the TouchPad. Sad news. So sad in fact, that webOS Nation is holding a contest right now where you can express your disappointment for this decision in Haiku form, for a chance to win a non-webOS device. Take that HP! And as much as I don't like to try and capitalize on someone else's misfortune, I wouldn't being doing my job if I didn't spread the word to CrackBerry Nation. A chance to win free stuff is always good. I'll leave it that... good luck!