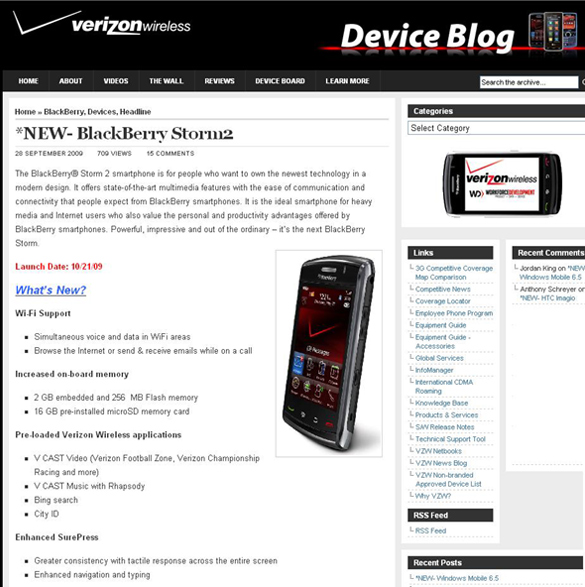 Over the last couple of days the blogosphere has filled up with release date rumors for both the BlackBerry Storm2 and the BlackBerry Bold 9700. It's becoming pretty clear that both of these devices are going to be announced and released in the weeks ahead. The October 21st date has been pretty popular, and the image above lends to that one for the BlackBerry Storm 9550. This blog post capture sent in by a tipster is said to come from Verizon's intranet, and points to an October 21st Launch Date. Note the post was written back on the 28th of September so isn't totally current.  I'm not sure if Verizon uses the "launch date" term to mean available in store to purchase or simply that the device is announced and available soon after.

Storm 2 Branding: It's pretty interesting to see how Verizon seems to be adopting the "Storm2 or Storm 2" name convention. Over the past many months, I heard from a LOT of people that it wouldn't be the "Storm 2" but just the 9550/9520. But so far these recent Verizon Storm 9550 leaks are showing a lot of Storm2 references (Vodafone stuff I have seen so far seems to be showing just Storm 9500 / Storm 9520). I've seen Storm2 with no space and Storm 2 with a space. I'll be curious to see the final branding/box/etc.. What do you think.. should it be the Storm2 9550 or just the Storm 9550?