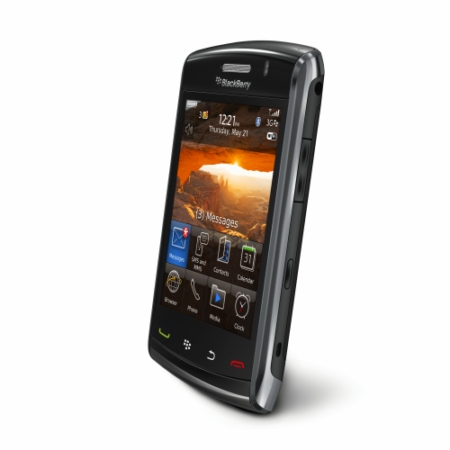 The second generation of RIM's innovative and award-winning touch-screen smartphone, the BlackBerry Storm2 significantly improves the BlackBerry® touch-screen platform with new technology and new features to let customers stay easily connected to the people, places and things that matter most.

In the busy holiday gift buying period, customers in the UK and Ireland will be able to get the new smartphone first through Vodafone, and it will be offered exclusively by Vodafone in Germany, Netherlands and Spain. It will also be made available in France, Italy and South Africa in time for Christmas.

The BlackBerry Storm2 with BlackBerry OS 5 evolves the BlackBerry touch-screen platform with hundreds of hardware and software enhancements.

The BlackBerry Storm2 smartphone introduces a new SurePress technology based on an electronic system that provides the user with tactile feedback when the touch-screen is pressed. The new system responds equally to gentle pressure applied anywhere on the surface of the screen and makes clicking the display practically effortless. Typing on the smartphone's virtual keyboards is easier, more comfortable and more accurate. The new SurePress technology also allows the user to type a letter with one thumb even while their other thumb may still be touching or resting on another letter, enabling faster typing and multi-key actions such as Shift or Alt -key combinations.

Pricing will be announced by the individual in-country operating companies. As an indication, Vodafone UK will be offering the BlackBerry Storm2 free from £35 per month on a 24-month contract that includes 600 minutes talk-time, unlimited BlackBerry Internet Service, unlimited text messaging, as well as unlimited access to VMI (Vodafone Mobile Internet) and broadband.