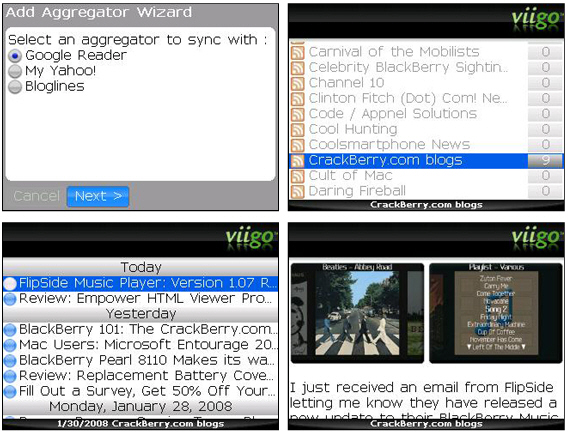 Ask any hardcore BlackBerry user to name their Top 5 Must Have BlackBerry applications and you are just about guaranteed to hear Viigo named among them. Why? Well for one, it's FREE. And for two, it's pretty darn good.

If you're not familiar with Viigo, it's an awesome RSS client for your BlackBerry. and with the version 2.2.82 the already-awesome app just got awesomer. Version 2.2.82 improvements include:

In this updated version of Viigo advertising is now shown on certain feeds, but from my browsing around so far the ads are minimal, subtle and not annoying at all. You gotta pay the bills, and if you can do so while keeping the App free then I say do it!

I'm a Google Reader user, so I was pumped to see Viigo now support it. But it creates a new problem for me - I have about a 1,000 feeds in my Google Reader account, and I keep them all organized into folders (BlackBerry Sites, Mac Sites, Web Dev Sites, News Sites, etc.). When Viigo imported them, it dumped them all into one LONG list in Alphabetical Order. I now either need a) the ability to use keyboard shortcuts to jump to feeds (hit C to get to the C feeds and then a short scroll to say CrackBerry) or I need the ability to easily put my feeds into Folders. Maybe the functionality is there and I just haven't figured it out yet?! Either way, it's a great app that you should immediately download and try if you haven't yet!