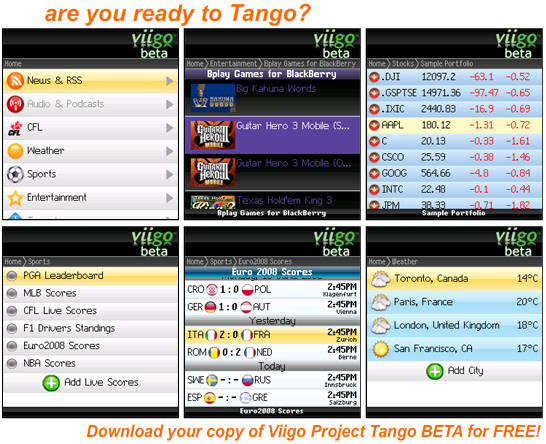 Back in April I brought you a sneak peak of Viigo "Project Tango" and today, after weeks of anxious waiting, you can finally download yourself a beta copy and give it a try! Read On for the details...

Viigo is running two beta programs over the summer months as they prepare for a September final release of Viigo 3.0:

As of right now the Private/Public Betas are running the same code base, but the Private testers will be getting new features shortly (ie. Audio) which will make their way to the Public beta a few weeks later. You can expect to see 2 or 3 versions of the beta before the final release hits and Viigo will automatically notify you when a new version becomes available. Unfortunately, the beta won't carry the CrackBerry.com branding, so if you want to go beta you'll have to sacrifice that for a few months. Don't worry though - when the final CrackBerry.com Edition of Viigo 3.0 is released it'll be backed with some sweeeeet schtuff you won't find anywhere else.

What's in the Public Beta