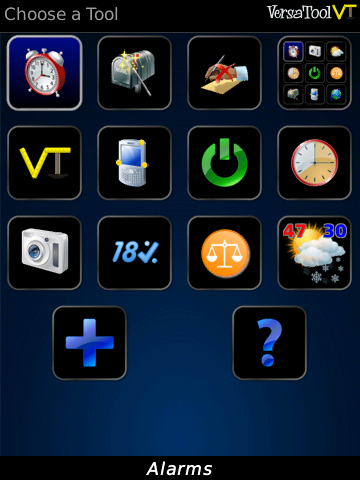 We had the pleasure of announcing the beta testing phase for VersaTool not too long ago. Now VersaTool has reached the point where it's waiting for acceptance into BlackBerry App World. No need to wait for Research In Motion to approve it though. Marcus, from VersatileMonkey has released VersaTool in the CrackBerry App Store knowing not all users have access to BlackBerry App World and some just prefer not to use it.

VersaTool as some of you may remember, is a great all in one utility. Some of the functions VersaTool replaces would normally take 3-4 different apps to achieve. Be it fulfilling the need for multiple alarms right down to something as simple as a tip calculator, VersaTool can help. As VersaTool is no longer running in beta, Marcus has set it up so that everyone who wants to try the app out gets a 30 day free trial. After the 30 days is up, you can then purchase VersaTool for only $4.99. Have a look at the feature list and then look at other apps. I'm guessing you couldn't buy them all for what VersaTool sells for and have them offer all the functionality VersaTool does. Give it a shot and let us know what you think in the comments.