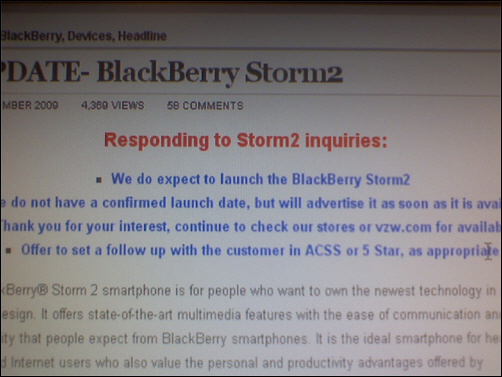 Remember that Verizon Intranet BlackBerry Storm2 blog post we told you about the other day? You know, the one that was also pointing to the rumored October 21st launch date? Well it turns out the post has now been updated, as shown by the photo snapped of it above, with some news that may not be received too favorably by those waiting on the new Storm.

Though Verizon does expect to launch the BlackBerry Storm2, the exact dates they are going to both announce it and release it are a little less clear than they were looking previously. As we pointed out earlier today, it's looking like the technical acceptance process was at the root (at least partially anyways) of the reason they didn't announce the Storm2 on the 15th at the same time RIM and Vodafone did.