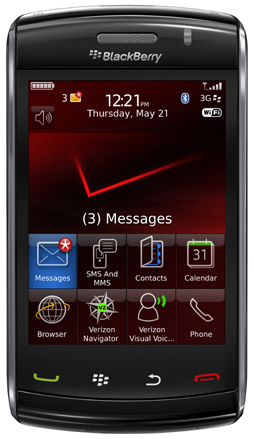 Here it is Storm2 chasers... the press release we have all been waiting for! And it looks like you won't have to wait long now to pick up a BlackBerry Storm2, with availability scheduled for October 28th - this Wednesday. As previously posted, Verizon Blackberry Storm2 pricing comes in at $179 on a 2yr contract after a mail-in rebate, but there's no mention of a BOGO promotion or upgrade incentive for Storm1 users... at least in the press release (if any of these promotions do exist, could be they'll roll into action in the near future). If you haven't done it yet, be sure to check out our BlackBerry Storm2 Review. Press release below.

As for why the Verizon press release was delayed beyond RIM/Vodafone's announcement of the BlackBerry Storm2, no official reason was stated, but judging by the looks of the press release the official argument might be that they were waiting for the release of OS 5.0 for the Storm 9530, so original Storm owners were taken care of prior to the Storm2's launch.