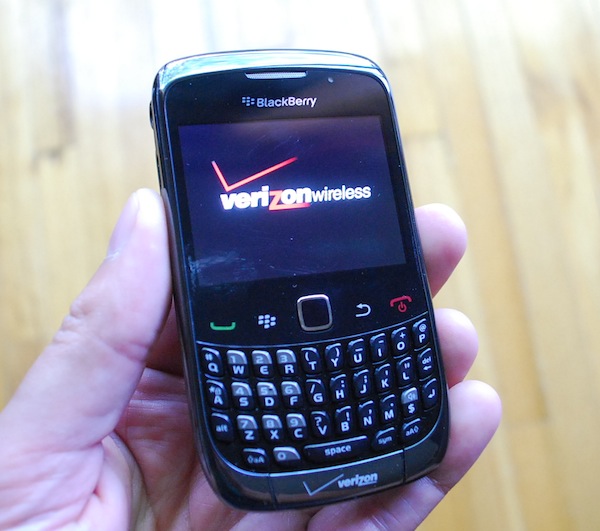 Verizon's latest offering comes in the form of the new BlackBerry Curve 3G. A near dead-ringer for its 8530 sibling, the Curve 3G (or 9330) is another "entry-level" device geared towards users just getting into BlackBerry or looking for a cheaper alternative to the more expensive models like the BlackBerry Bold 9650. The device features a full-QWERTY keyboard, Wifi, GPS, optical trackpad and the ability to run BlackBerry 6 thanks to its memory increase from up to 512MB from the standard 256MB found in the Curve 8530 and even the Curve 3G 9300 (upon release, which we have yet to see for a device other than the BlackBerry Torch). The Curve 3G obviously isn't marketed toward seasoned BlackBerry users as most will feel it is a bit of a downgrade with a "cheaper" feel and lower resolution screen. If you're checking out BlackBerry for the first time or looking to get in on the less expensive end, the Curve 3G just may be the device for you. Read on for our full review.

The Curve 3G feels solid overall when first handled. It feels fairly well constructed and you can't help but notice that it's all plastic all around, with no chrome bezel to break things up. The 320x240 screen sits over top of the Send, Menu, Back and End buttons which are centered by the optical trackpad. The screen and button set flow together extremely well as they are all one piece that covers right down to the keyboard. The full-QWERTY keyboard goes back to the style of the old 83xx series which is one of my favorites. The keys are separated so even people like myself with fat fingers have no problems typing. They are a bit "clicky" at first and feel kind of cheap, but I think once you get into using the device you won't really notice either.

The Curve 3G is sporting Bluetooth, Wifi and GPS as well. The Curve 8530 was one of the first devices on Verizon to have Wifi available and it's been a hit ever since. With so many college campuses being Wifi'ed out, having the option on a device is a huge plus and can potentially save a ton of money.

There is 512MB of internal memory, which is actually double what the Curve 3G 9300 (the GSM version has). It seems for BlackBerry 6 GSM devices can get away with 256MB of memory while CDMA devices require 512MB, hence the bump up compared ot the Curve 3G 9300. The Curve 3G supports up to a 32GB microSD memory card as well. The device isn't bursting with memory, but it's enough to get things done. Using a media card (a 2GB card is included) for photos, videos and music, you really don't have to worry about eating up space on the device itself.

The Curve 3G comes from Verizon loaded with OS 5.0 but is "BlackBerry 6 ready". What does this mean? This means that should Verizon (and pretty much every other carrier) get their act together, you will be able to install BlackBerry 6 on this device. For now we're stuck with OS 5.0 which still does what it does and does it well. Included are the default applications you would expect including email, SMS, MMS, phone, calendar, memopad, tasks, clock and BlackBerry Messenger. Other add-on applications like BlackBerry App World 2.0, AIM, Google Talk, Yahoo! Messenger, Myspace, Facebook, Flickr and more are all available for download at launch as well. The web browser is a bit outdated at this point but with the new WebKit browser on the way as part of BlackBerry 6 things will be much better on that end.

I did load up a leaked version of OS 6 on my 9330 just to take it for a test drive. The OS is available as a leaked beta, but still hasn't been officially released by Verizon. The revamped OS is a big redesign of the old 5.0, and really adds to the usability of the device. It adds amazing features like the WebKit browser, Universal Search, multiple views and more. OS 6 runs very well on the Curve 3G and is only held back by the low resolution screen. Don't get me wrong I love OS 6, it just seems to drop a bit short on the 9330 when you go from using the Torch 9800 or even the Bold 9650 with the same OS. OS 6 does make things a whole lot easier as it is much easier to get around the device (mainly with Universal Search) and having the updated browser is a huge plus.

Overall I can say I do like the Curve 3G. As in the case of the Curve 8530 however, if you are switching from a newer BlackBerry you mostly likely won't be satisfied. The Curve 3G is geared towards new to BlackBerry Users and those who don't really need/want the "latest and greatest". The device is solid and has all of the BlackBerry features you would expect, and with BlackBerry 6 is really gets the job done. New users will love the OS and won't mind the low resolution as they get into the BlackBerry world, but may look to upgrade to a different device down the road.