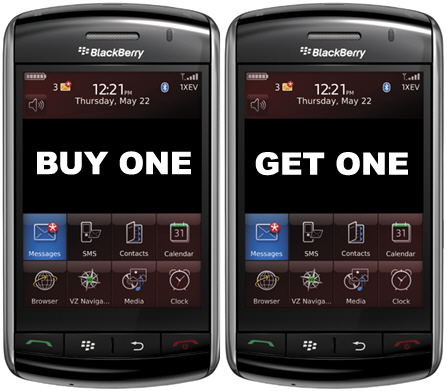 This is what happens when tough economic times hit... the strong companies start to pounce on the weak in hopes of growing even stronger for when the times get good again. And so the word is that tomorrow Verizon is going to flex some muscle and begin offering a compelling sales promotion that will continue through to March 31st - Buy One Get One free. The Boy Genius got the deets:

With pricing slated to be as follows:

A couple of non-BlackBerry devices are included in the BOGO as well. You can jump over to BGR for that. With a deal like this I think there's going to be a whole lot more BlackBerry-addicted families in the near future! Let's hope this deal pans out as above. Any takers in the audience?