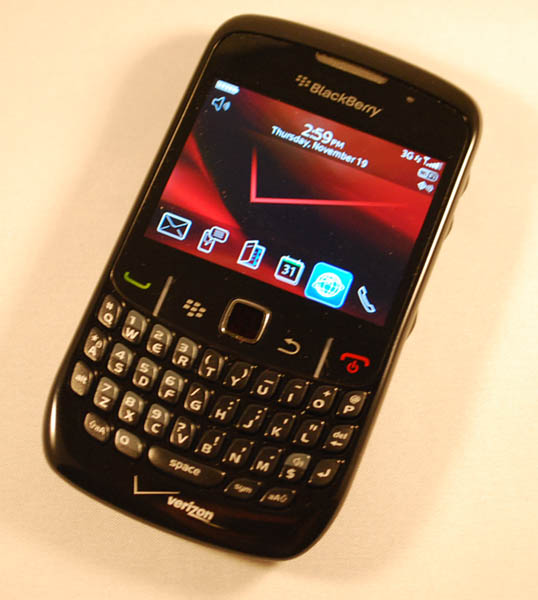 Ever since I had a chance to play with the Curve 8520, I have held a special place in my BlackBerry heart for the revamped 85xx series devices. It flashes me back to the days of my 8830 and being a new BlackBerry user. I think the Curve 8530 would have been a much better starting point, and is definitely a great choice for those entering the BlackBerry world for the first time. The smooth design and lightweight build make the device one that just feels good. Its easy to hold, has great trackpad navigation and sports the familiar Curve keyboard. The addition of the dedicated media buttons along the top of the device are an added bonus as well. So lets jump in and find out why the Curve 8530 is not a step back like some may think, and rather a great "starter" device for new BlackBerry users and "dumbphone" converts.

The device itself just looks cool. Unlike most newer devices, the Curve 8530 sports an all black design. There is no flashy chrome bezel or leather battery door. Lets face it, the Curve 8530 isn't meant to look good - its meant to have the core BlackBerry components without the bling. The keyboard takes from the original Curve series, and you either love it or hate it. With newer keyboard designs like that of the Bold 9000 and Tour 9630, some may have given up on this spaced-out design. I still think that this is one of the best keyboard layouts, especially if you are new to a full QWERTY device.

The front buttons rest nicely around the trackpad, and they all flow right into the display. The trackpad is awesome and fits perfectly with the device. There is no "loose" feeling to it and its a huge upgrade from the trackball navigation. There are no gaps or loose keys, and the device is very solid overall. On the sides is a rubber coating that flows onto the back of the unit. The volume and convenience keys are covered, which in turn makes them more durable and able to stand up to years of being pulled in and out of pockets. The top of the device sports the new dedicated media keys. I personally don't use my BlackBerry for media (music/video) often, so these keys could have been better as the standard Mute/Standby buttons in my opinion. I can see how they are great for users who listen to music often on their device, as it makes access and skipping tracks a whole lot easier. The battery door is a carbon-fiber looking plastic, and I much prefer the plain black door of the 8520.

The pressure-fitted battery door sits snug in the device but isn't difficult to remove (for me anyway, maybe Kevin would say otherwise). Inside rests the battery and memory card. The only downsides I can see to the device are the screen resolution and camera. Current BlackBerry users will obviously make the statement that the 320x240 resolution is a step back from the current 480x360 of the newer devices, however for first time users (who the device is geared toward) shouldn't have any complaints. As for the camera - the lower 2 MP version and lack of flash may be a drawback to some. The device takes decent pictures, but there is a noticable difference in the images from that of my Tour camera. The lack of a flash limits the abilities of the camera as well.

As we move on to the "meat" of the device, there are actually a lot of things to take note of. First off, the Curve 8530 is running OS 5.0.0.337. This means that it packs in all the cool features of OS 5.0 that we looked at when I checked out the Bold 9700 - like BBM 5.0, improved browser, improved message options and email and more. One of the biggest additions is obviously the Wifi capability of the device. Until the release of the Storm2, Verizon had not seen Wifi on any devices, so it is a great thing to see CDMA devices being rolled out with Wifi. There are preloaded IM applications, as well as Facebook, Myspace and Flickr. These are sure to please students and those that are heavy into social media. Also included is BlackBerry App World, and all of the organizational tools are available as well. Calendar, tasks, memos, address book and more. Round it out with the BlackBerry browser and BlackBerry Messenger and you're set.

Typing on the Curve 8530 is a breeze. The keyboard is the right size for the device, and the 8530 just sits well in your hand. Its easy to hold on to given the rounded design and rubber sides, and small enough to carry around in your pocket. The device is fast and switching between applications is quick and easy. Some newer applications may have minor display issues on the 8530's lower resolution screen as most have been updated for higher resolution devices. The same issue comes into play with the web browser. Having a full HTML browser on a device is great, but the low resolution is at times hard to read/see. Zooming on the pages helps a bit, but some sites are just too difficult to see in the browser.

Its easy to jump into social media and IM with the 8530, as all of the apps are ready and waiting. IM apps (AIM, GTalk, MSN and Yahoo!) are all ready for downloading, as well as the Facebook and Myspace apps. I like the fact that its easy to pick up the device and not have to search for basic apps like this that the 8530 user will be searching for.

Playing music/video on the Curve 8530 is easy with the dedicated media buttons. I'm not one to listen to much music from my BlackBerry, but the 8530 makes me want to. Having the buttons on top of the device makes for easy access, and really adds to the value of the phone. You can throw it in your pocket or bag and easily skip or pause tracks without having to look at the device. If you're used to carting around a music player in addition to your BlackBerry, you may be able to stick with just one device now. The sound quality from the Curve is good overall. The device speaker isn't bad, but you can get much better sound from a good set of earbuds. The speaker sounds somewhat tinny at times, but you can tweak the settings to get a little more out of it. The included earbuds actually aren't too bad and the music sounds comparable to an iPod with the OEM earbuds.

Overall I think the BlackBerry Curve 8530 is an awesome starter device. I don't think that a seasoned BlackBerry user will pick this device, but they'll rather stick with something more "beefy" like a Bold 9700 or Tour 9630. As an entry level device however, the 8530 can't be beat. It has a great design and feel, awesome trackpad, great media functions and the latest BlackBerry 5.0 OS features. The addition of Wifi is a huge plus for Verizon users. The first full QWERTY device to have Wifi should appeal to a larger userbase than with previous releases. All in all a great jumping off point for those looking to get into the BlackBerry world. Granted some users will take it for a spin and may end up sticking with it. I think the only drawback for a long time BlackBerry user on this device would be adjusting back to the lower resolution screen (and perhaps the camera if you take a lot of pictures). In the end, it's a great device for starting out that should help bring many people over from the non-BlackBerry world.