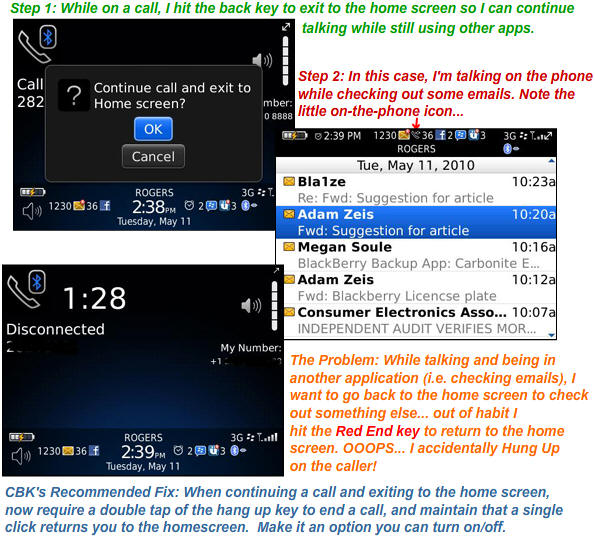 * Update - More Ideas: Lots of great comments on this one which proves this problem goes well beyond just me. Another great suggestion that may fit better within the BlackBerry way of doing things (vs. introducing the concept of a double click) woud be to add a pop-up with the "are you sure you want to end this call?" question when you hit the end key when on a call but NOT in the phone app. Yet another option, when outside the phone app, is to have a tap of the end key take you back to the homescreen, while a press and hold on the end key hangs up on the call (the menu key does this for launching the app switcher, so also fits within the BlackBerry way of doing things. And yet one more option... why not just make it so that that when you're on a call but outside the phone app, the end key simply no longer works as a hang up button. Instead, people have to talk the green call key to return to the phone app, and from there they can hang up. *

There's over 40 million active BlackBerry users out there, so I CAN'T BE THE ONLY ONE who gets ticked off when this happens....

One of the things I have absolutely LOVED about my BlackBerry from day one is the fact that while I'm talking to somebody on the phone, I can hit the escape/back key and exit to the homescreen and actually USE the device while on a call. So if I'm talking to somebody and they ask me for a person's number, I can quickly look it up in the address book and give it to them without missing a beat. Or if the person on the call wants to discuss an email they sent, I can exit the call, go to the homescreen, open up the email app and find their email and read it while talking to them. It's a beautiful thing.

When on a phone call though, this everyday habitual habit of exiting to the homescreen by hitting the end key causes a slight hiccup... IT ENDS THE CALL! Seriously... it's only Tuesday as I write this and I've already accidentally hung up on THREE people this week. It's getting annoying. My quick solution to this: why not have it so that when you choose to leave the phone app and continue a call from the homescreen, that hanging up requires a double tap of the end call key. So if you're in the phone app, hitting the end call key hangs up the phone. HOWEVER, if you're on a call but NOT in the phone app, then it requires a double press to hang up. This would really change my life... for the better!

Sooo... if there is a developer out there who can whip me up a little utility app that gives me this functionality, let's have it! We can call it the CrackBerry Kevin app or CBK app for short (or something else.. lol). And if RIM would like to put this into BlackBerry 6 that would be awesome. And if this functionality is somehow how there and I just don't know about it yet, let me know that too so I can install it myself and whip it into a blog post and help everybody out there who has also run into this issue.  Ok thanks. Bye.  / end hyper chaotic rant