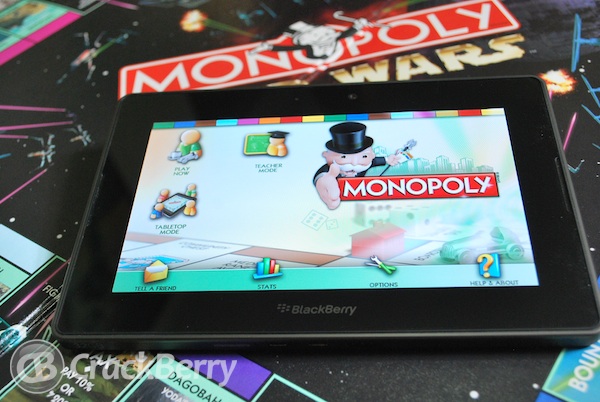 I use my BlackBerry PlayBook for all kinds of things. I browse the web from the couch, view my recipes in Evernote in the kitchen and even take video of my kids galavanting around the house. One of my favorite things however is using my PlayBook for family game night. The Zeis family are a competitive bunch, so we like to rock out a game night at least once a week. Although the PlayBook is a great work tool, there are also some great games available that make it fun for the whole family. The games are just one part of the equation though -- keep reading to see how I use my BlackBerry PlayBook to have an awesome family game night.

Before the games even begin I like to make sure we're prepped with the bigget necessity of all -- snacks!

I keep all my favorite recipes stored in an Evernote notebook, so when I'm ready to find some great snacks for game night they are only a few taps away. I bring my PlayBook into the kitchen and we'll spend some time picking out and making a great snack for the festivities. I've gone quite a bit into Evernote in the past, and nothing has changed. If you find a good recipe online or even in a magazine, toss it into Evernote (text or photo) and you'll always have it at the ready. You can even tag your favorite snacks with "game night" so a simple search will show you what's in your arsenal.

Having some background music (depending on the game) is always fun, so for that I'll plug my PlayBook into my home speakers and crank up the tunes to get things going. You can transfer your music from your PC to your PlayBook easily and have a game night playlist, or use a streaming service like Slacker Radio. Let your PlayBook handle it or hook it up to external speakers (or even your TV via HDMI) to bring the music to the whole family.

While hovering around the 7" screen of the PlayBook for a game can bring your family closer together, we like to go big and play on the living room TV. For that I have a long microHDMI cable to mirror the PlayBook so everyone can get a great view. You'll still have to use the PlayBook (or even BlackBerry Remote from your phone) to interact, but having the game on a big screen for all to see definitely makes for a more comfortable game night.

I prefer board games for our game night, but if you want to rock out some Dead Space or Plants vs. Zombies that's up to you. Our favorites are Monopoly, Uno, The Game of Life and one of the many incarnations of connect four. We'll usually lay out the snacks, fire up the HDMI cable and get our game on. Something like Monopoly is a great one for this setup. Whoever isn't taking a turn can see what's going on thanks to the TV, and the player making moves holds onto the PlayBook. If we're feeling "low key" we'll use the cool tabletop mode and ditch the HDMI cable for a more homey experience.

You can go pretty much anywhere here depending on your game choices, the number of players etc. Just get creative and you'll be gaming up a storm in no time at all. There are loads of PlayBook games that can be awesome fun on game night. Here are a few of my favorites:

Want to go a bit overboard? If you play cards or other "real" family fun games that aren't on the PlayBook, check out Game Show Soundboard. I've abused this one on the CrackBerry Podcast a few times, but it really is neat for game night. Not only does it come with a handful of gameshow sounds, you can also use it as a timer and scorekeeper which is pretty awesome. If it lands in the wrong hands it can be pretty annoying (as I've found out a time or two) so just make sure you don't get carried away.

Some alternatives are ScoreCard and Scorekeeper. Both are totally free and do just what they say - keep your score. Neither has all the fancy sound effects of Game Show Soundboard either so you don't have to worry about the annoying factor :)

Last but certainly not least -- if you just can't or don't want to go all geeky with your game nights, why not start simple? There are some great dice rolling apps for BlackBerry that can give you an entry-level start into the world of BlackBerry game nights. Play your favorite games as you normally would, but drop the real dice for some virtual ones.

So that's that! Are my game nights geeked up? Of course. We still get to pick a night for some family fun, and that's really all that matters to me. Before we start each week we'll also look to see what new games or out so we can keep explanding our game closet.

How do you use BlackBerry for game night? Let us know in the comments!