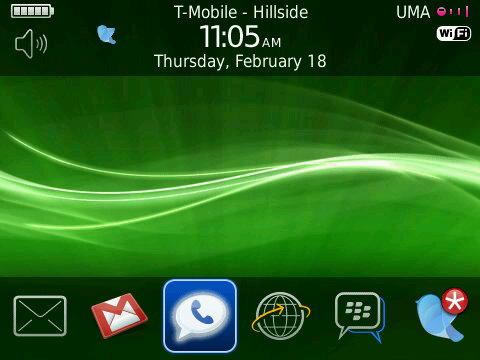 A few months back we posted some quick tips for using Google Voice. Today we're going to look at the app itself - how it works and just what it does. We'll check out how Google Voice can make your life easier, and what the app is still lacking. From having a unified phone number to being able to access all of your account details, messages and voicemails all from one easy place. Granted you still need to be invited to use Google Voice, but it seems like invites are floating around all over and are fairly easy to come by. So if you are a first time user or a seasoned Google Voice vet, hit the jump for a look at the app and see what makes it tick.

After you receive your invite, you'll be asked to choose a Google Voice number. You can search through any of the available numbers and choose one that works for you. The number will be tied to your Gmail account, making it easy for you to access everything in one easy place. You will need to setup a device for which to forward your Google Voice calls, and you'll receive a test call to verify the number is your own. One of the first downsides of Google Voice is noticed here where you are not permitted to add a phone number with an extension (for now anyway). So this means that many business lines are out of luck if they do not have a direct line. After verifying the number (or more than one) you are pretty much good to go.

You can download the app from m.google.com/voice from your mobile device. Sign in using your Gmail credentials, and you will be asked to choose the number associated with the current device. From here you will see the main Google Voice screen has only two tabs - the Dialer and Inbox (or messages). The Dialer is where you place calls (as it replaces your standard dialing procedure) or you may also dial directly from the contact list (we'll get into that in a bit). The Inbox tab displays your messages, and you can choose to show a different label to see SMS, Voicemail, Placed, Received, Starred or Missed.

Choose the Number Associated with the Device

Jumping into the Settings shows the few options you can tweak in the app. You have the choice to change the device number (which you shouldn't have to if you picked the right one when you logged in), and also options to preload voicemails, play voicemail via the speaker or handset, and the update interval (which can be set to 5 minutes at the lowest). After you get this done, you are up and running with Google Voice.

The tricky stuff starts right off the bat when you need to make a call. Since you're using your Google Voice number, it makes sense that you'll want that number to display when calling other people (and not the actual number of the device). You have two options for calling with your Google Voice number. The easiest is to fire up the app and use the Dialer.

Here you can enter a number to call, choose from your call list within the app, or view the address book. Most of us would go right to the third option, but its not as easy as choosing a contact from the address book and placing the call. You'll need to choose the contact, then select "Call using Google Voice". The number isn't magically imported into the app for you to call as one would think. Not a huge deal, but a few more steps than would really be necessary. Once you make or receive a few calls and build up the call list within the app, its much easier to just choose a placed or missed call from the list when dialing. You can also call contacts from the contact list itself but finding the contact in the list, pressing the Menu key and choosing "Call using Google Voice". Any of these options place the call to the contact using an access number rather than dialing direct. This isn't a huge deal, but sometimes Google Voice has trouble connecting and you need to make multiple attempts just to initiate a call. Once you get used to the extra steps you're in good shape. Your Google Voice number displays for the party you are calling (rather than the device number) and just like that you're a Google Voice user.

SMS messages are a bit shaky themselves with Google Voice, but at least they work. Again we fall back on the dialing rules, and to send an SMS have to use the "SMS using Google Voice" option from the menu when choosing a contact. This option brings you into the Google Voice app where you can compose the message, having to keep in mind that BlackBerry AutoText and other typing features you're used to get tossed out the window. Many of my SMS messages end up in all lowercase without punctuation due to the fact that the app overlooks the BlackBerry features. From there send your message and you're done. Now the good news is that once you start a conversation via SMS, you can reply to messages without having to use the app. The bad news? If the person isn't a Google Voice user, the messages come in from an odd forwarding number and display the user after (see below). If the user is a Google Voice user however, they display just as they would using standard SMS. The other thing that took me a while to figure out, is that Google Voice pretty much ignores your contact list and goes by your actual Google Voice contacts (which you can import from Gmail). I was wondering why numbers that we listed in my contacts were showing up without names, and then I realized you have to add the name/number to your Google Voice contacts through the web as well.

Menu Options for Calling or SMS

SMS from another Google Voice Number

SMS within the Google Voice App

In the Google Voice settings from the web, you can choose which devices receive SMS (so if you use more than one device and don't want SMS messages going to all of them you can specifiy). The messages will also be received in the Google Voice app, although only after the refresh time you chose in the settings. And regardless of if you read the message on the device, it will still show as new in the app. For this reason some may choose to not have SMS go to the device itself and only use the app,  the only downside being you won't see the messages right away (and you can't set an alert for them). In the app you can reply to messages and see the conversation thread, as well as archive, delete and label messages.

Is Google Voice Right for You?

Google Voice simply isn't for everyone. If you are just a consumer or business user with one device and don't have demanding needs, you're probably fine with what you have. If you are a power user that wants the most control of your device/number or you use multiple devices, you should definitely check out Google Voice. Its great to have a universal number, so no matter how many times you change devices you don't change numbers. I swap back and forth from my 9700 on T-Mobile to any number of other devices on Verizon, and since I can't just swap a SIM from each device, having a Google Voice number is the way to go. You can also set the number to forward to multiple phones, so your mobile device and home phone can ring at the same time, and you can answer whichever you choose. If you're not sure if you need a Google Voice number, then you probably don't. I had my number for nearly 3 years before I finally converted for good, and I'll never look back. There are also a ton of options for Google Voice that can be set from the web. I just love having all my SMS, voicemail, contacts and call logs in one place. The app has a way to go as well. I would love to see better SMS, and any sort of MMS. It would be great if it could integrate more with the native Phone and Messages apps as well, but its definitely off to a good start.

For more on Google Voice, check out google.com/voice and to download the mobile app for BlackBerry, head to m.google.com/voice from your device.
From the new Editor's Desk