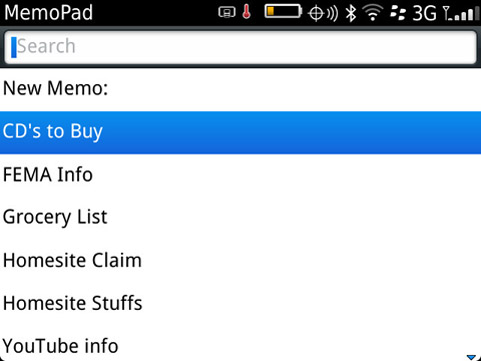 I'll be the first to admit, when it comes to many of the stock applications on my BlackBerry device, like Password Keeper, Brick Breaker, etc, I prefer to remove them right off the bat for extra space. One application that I have always found a good use in my personal life for is the BlackBerry Memo application, and it led me to wonder if everyone else saw the same real life uses. Let's hit the break and take a look at some of the different occasions of which I use the memos app in my everyday life.

Often times while cruising the web, or looking through magazines I notice a number of things that I woud like to purchase, especially music and quite honestly, my memory isn't always the greatest and I tend to forget. As soon as I find something that interests me, or that I may want to purchase I add it to the list, usually I organize lists by like "Music to Buy" "Books to Buy" Odds & Ends" and any other occassion at the time. What is great about using memos is that the lists are easily accessible and they can be edited on the fly, so if I purchase something off the list it can be removed, or if something needs to be added it can be done easily.

Keeping organized lists helps ensure that things are not forgotten, and quite honestly, who wants to be carrying around a pad and pen to keep track of their lists when they can do it right from their beloved BlackBerry device?

Using the MemoPad app to capture important information on the go

Ever been out and about and got an important phone call where you needed to capture some information, only to realize you didn't have a pad and pen to write it down? Yeah, me too -- recently and luckily the MemoPad application was there to save the day and allow me to easily capture all the information and have it stowed away safely with me while on the go. While it may not be ideal for everyone to use memos while on the phone, since it will require you to put use the speakerphone or be on a bluetooth, if you can get past that it will make things much easier.

Once you activate the speakerphone, or if you are on a bluetooth, you simply launch the MemoPad app, start a new memo with whatever the topic is and then input the information and don't forget to save it. Using the MemoPad application to keep notes of important account numbers, reference numbers or call back numbers makes life so much easier since you aren't left looking for a scrap of paper, or a pen to write information on your hand while on the go.

Using the MemoPad app as a calendar replacement

To me I find the calendar app to be a bit cumbersome, adding new appointments often times takes longer than I prefer, and I end up forgetting to add things because of it. When I want to add an appointment I want to put a date, put a note about the appointment and move along, I don't want to be scrolling through various options, struggling to make sense of it all, I want it to be simple.

Organizing your MemoPad app by dates can allow you to easily add and remove appointments, as well as keep various notes about the appointment, whether before it happens or adding a recap of the event.  Being able to keep all the extra notes about each event and being able to easily update them at anytime definitely wins my vote over the stock calendar app.

Using the MemoPad app for random odds and ends

Another great thing about the MemoPad application is that it isn't limited to only adding memos but you can also add tasks, keep diary type entries, store contact information or just about anything else you can think of. I have known people who have written books, wrote songs, kept tasks lists and many other things, which is part of why I love it so much.

Sure, there is a separate tasks application built into the BlackBerry OS but I constantly find myself using the memos application instead since I store so much other stuff in there, it works best. No need to open another application to add a task, and then hop back to memos to update a list, why not do it all in one place?

While the uses of the memo application vary by user, and some users have probably yet to even figure out what they would use it for, to me it is one of the most under-rated parts of the OS. So I challenge you to try out the memo application in your everyday life, see where it fits best for you, and be sure to let us know your experience as you go through it!