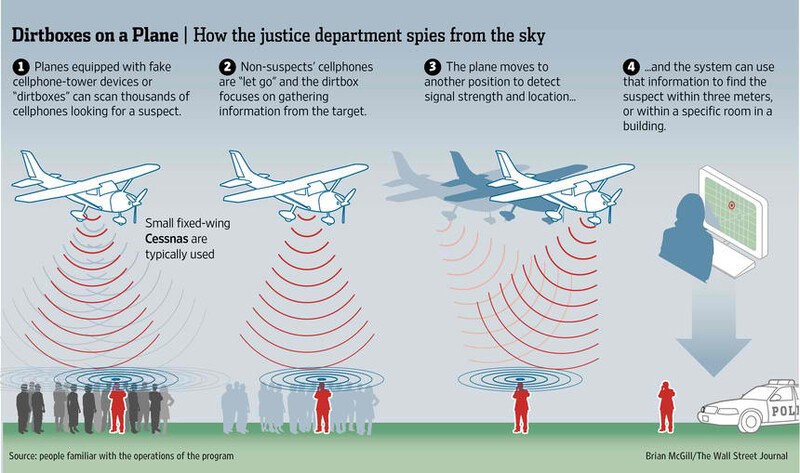 A new report suggests that a U.S. Marshals Service spy program operating under the Justice Department is collecting thousands of cellphone identification numbers from Americans by employing fake communication towers. The program has been operational since 2007 and the towers are mounted on Cessna airplanes operating out of at least five metropolitan-area airports. These fake towers would trick cell phones on the ground into sending their identification numbers, which are then collected by the government for use in criminal cases.

According to the WSJ, this is how the program works:

Planes are equipped with devices—some known as "dirtboxes" to law-enforcement officials because of the initials of the Boeing Co. unit that produces them—which mimic cell towers of large telecommunications firms and trick cellphones into reporting their unique registration information.

And this is how the dirtboxes work in obtaining your phone's identifying information:

Cellphones are programmed to connect automatically to the strongest cell tower signal. The device being used by the U.S. Marshals Service identifies itself as having the closest, strongest signal, even though it doesn't, and forces all the phones that can detect its signal to send in their unique registration information. Even having encryption on one's phone, such as Apple Co. 's iPhone 6 now includes, doesn't prevent this process.

According to the Journal, the program is targeted at "individuals under investigation" by the government, but it does collect information from innocent bystanders who aren't a suspect. After analysis of the collected data, it is reported that information from suspects are kept while non-suspect phone data is not.

Through the program, the government no longer needs to rely on phone companies to provide them with cell tower information and they can obtain this data themselves. The danger for consumers is that this technology could interfere with phone calls, though it's reported that special software helps to minimize interruptions with emergency calls to 911.

Also unknown are the steps taken to ensure data collected on innocent people isn't kept for future examination by investigators. A federal appeals court ruled earlier this year that over-collection of data by investigators, and stockpiling of such data, was a violation of the Constitution.

Do you think the latest tactics of the Justice Department is more over-reaching than NSA data collection in the past where massive amounts of cell phone records were collected?