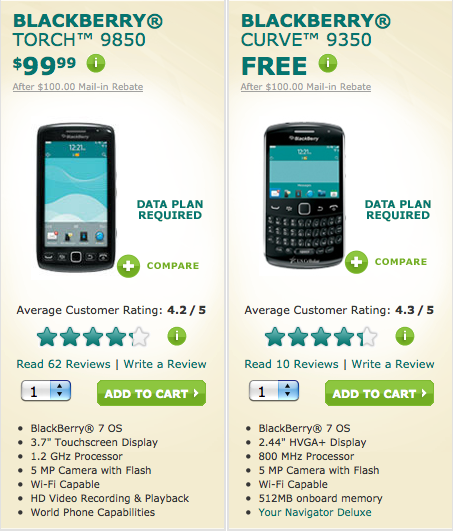 If you're currently looking to start up a new cell phone contract, check out US Cellular. They are holding a holiday promotion for new customers which allows them to get a BlackBerry Torch 9850 or Bold 9650 for $99.99 or a Curve 9350 for free (both after mail-in-rebate). US Cellular has several plans to choose from, and unique benefits such as free Battery Swap, Overage Protection, and free incoming calls, texts and picture messages. The deal doesn't last forever so if you're interested make sure you take advantage of it before November 28th.

Full press release and more details are after the break.


Reward Yourself and Everyone on Your List With a U.S. Cellular Smartphone for $99.99 or Less
Don't Wait to Get the Best Prices - U.S. Cellular Holiday Deals Start Nov. 21

U.S. Cellular (NYSE:USM) is rewarding customers this holiday season with great deals kicking off four days before Black Friday. New customers who switch to U.S. Cellular can be a part of the only rewards program in wireless and get any of the carrier's cutting-edge smartphones for $99.99 or less after a $100 mail-in rebate.

Customers can get a free phone now and be well on their way to a second free phone with the 2,000 point bonus they receive when they sign up for "My Account" within 14 days of starting service. Current U.S. Cellular customers who add additional lines will also receive the 2,000 point bonus. Customers on Belief Plans are recognized for their loyalty and get points for doing simple things like paying their wireless bill on time, adding a line or referring friends and family. Points can be used for new phones faster, accessories, ringtones and monthly service charges.

"In addition to getting a great deal and joining the happiest customers in wireless, your rewards points will really add up, so you can get the latest cool phone faster without signing another contract," said David Kimbell, vice president of marketing for U.S. Cellular. "Get a jumpstart on your holiday shopping and start earning rewards now."

U.S. Cellular has introduced a new $39.99 plan that includes 450 minutes, free incoming calls, texts and pics, mobile-to-mobile calls, and nights and weekends beginning at 7:00 p.m. A great deal for families is the Essential Plus Plan, which can save customers up to $30 per line versus similar plans at other major carriers. It's $54.99 per line with 5 GB of data per line, 1,500 minutes to share, unlimited messaging and free incoming calls, mobile-to-mobile and nights and weekends beginning at 7:00 p.m.

Along with these great deals, competitively priced plans and rewards, U.S. Cellular customers also get unique benefits like free Battery Swap, Overage Protection, and free incoming calls, texts and picture messages. Associates are available to help customers and potential switchers select the device and plan that best meets their needs to organize and simplify their lives.

* Purchase of a data plan is required, and a new two-year agreement may apply for new customers. Mail-in rebates, additional terms, conditions, restrictions and/or charges may apply (while supplies last).

U.S. Cellular rewards its customers with unmatched benefits and industry-leading innovations designed to elevate the customer experience. The Chicago-based carrier has a strong line-up of cutting-edge devices that are all backed by its high-speed nationwide network that has the highest call quality of any national carrier. U.S. Cellular was named a J.D. Power and Associates 2011 Customer Service Champion and received PC Magazine's 2011 Readers' Choice Award. To learn more about U.S. Cellular, visit one of its retail stores or uscellular.com. To get the latest news, promos and videos, connect with U.S. Cellular on Facebook.com/uscellular, Twitter.com/uscellular and YouTube.com/uscellularcorp.
NEVER GONNA GIVE YOU UP NEVER GONNA LET YOU DOWN